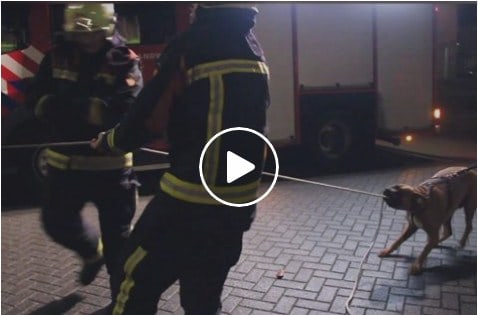 You would have heard about police dogs, or you may know that Dalmatians are considered as the dog of choice for firefighters, but the dog in this story, Rocky, is not a Dalmatian, and he is not a trained police dog. Rocky is a dog unlike any other.

His owner dad; Leendert Foppen, is a firefighter in the Netherlands, and it seems that this pooch has picked up some serious skills from his pop.

One stormy night in the Netherlands, firefighters were called to a residential street in the Dutch town of Harderwijk, where a live power line had become dangerously entangled in a damaged tree.

The firefighters decided that the tree had to be cut down to safely remove the cable, so as one of them operated a chainsaw at the tree’s trunk, the rest of the firefighters tied a rope around the tree to guide it down to the ground to release the caught cable.

A long time passed and lots of attempts were made to tug the tree down, but it hardly moved at all. The hardworking firemen continued with their tireless efforts when Rocky began getting unsettled that he couldn’t help.

The extra length of rope that trailed on the ground soon caught the attention of the helpful hound. Rocky’s owner can be seen in the video trying to pull his dog away but to no avail, the dog’s desire to help his father’s friends was to strong.

Suddenly, the job seemed a whole lot easier. As the team turned around they realized that Rocky the dog had joined the job and was also tugging on the rope! The hero hound used all his might to help the cause, and pulled on the rope as hard as he could. The extra strength from Rocky’s set of teeth really seemed to help out, as after just a few seconds the tree comes tumbling down to the ground.

The whole team of firefighters were absolutely amazed to see this fabulous dog coming to the rescue. They were so delighted at what they were witnessing, that the firefighters laughter actually drowns out the sound of the chainsaw cutting the tree down on such a stormy night!

The full video ends with the tree successfully being brought down and the live power cable safely removed. Rocky and the firefighters completed the job and ensured the street was once again safe for its residents.

As Rocky is one of the proud heroes of this story, he also received lots of petting and affection and was no doubt given a large, juicy steak, when he got back to the station!

If you were as delighted as us at seeing Rocky come to the rescue and help these hero firefighters do their amazing work, then please SHARE this story!

Back to Top
Close
68 shares
We use cookies to ensure that we give you the best experience on our website. If you continue to use this site we will assume that you are happy with it.Ok