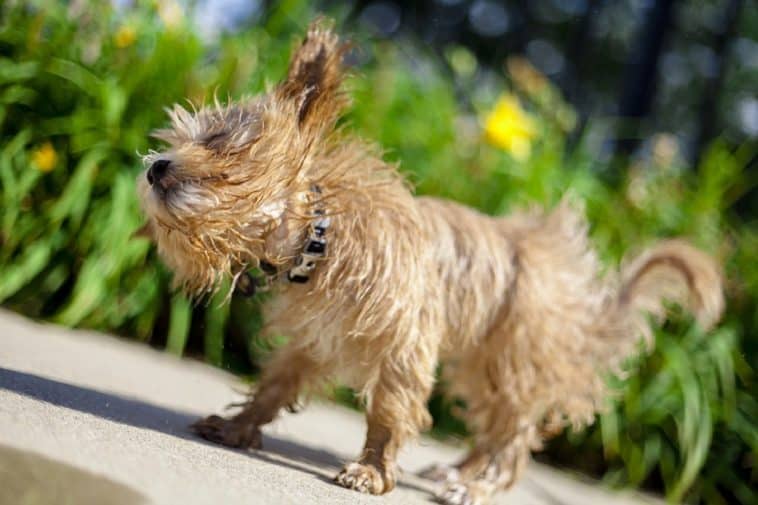 Unfortunately, we have yet to advance to a stage in science where our dogs can verbally communicate with us in a language that we understand.

So when your dogs exhibit strange behaviors, all that we can really do is speculate why it is. On today’s episode of ‘why is my dog doing the thing’, we have the inexplicable head shake.

Sometimes your dog may begin to excessively shake their head, and it can be quite an alarming behavior to witness. As it turns out, head shaking can occur for a number of different reasons.

These reasons can be good or bad, depending on the root cause. With that in mind, here are a few reasons that your dog may be shaking his or her head.

Your dog can shake their head for a number of reasons, including illness, things being stuck in their ears or allergies. It’s usually best to look at the bigger picture. Have you noticed any other symptoms? For instance, has your dog been itching their ears more than they usually do, or are their ears smelling? If this is the case, then there may be more going on.

A head tremor is very different from a random head shake. If it’s a head shake then your dog is intentionally shaking their head. A head tremor, on the other hand, is an uncontrollable shake and it’s a sign of a deeper issue. If you notice that your dog is shaking uncontrollably then you should get in touch with your vet as this is an emergency.

A Few Common Causes of Head Shaking In Dogs

There are a number of treatable conditions that can cause your dog to shake their head more than usual. Here are just a few of the main ones.

Dogs are pretty durable creatures, but it’s worth noting that it’s always possible for them to hurt themselves, much like humans. They may injure themselves with other dogs at the park, when playing or going running.

Sometimes you may notice behavior changes after your dog has done a certain activity. If you are noticing any sudden behavioral changes such as lethargy, signs of pain and sensitivity in the ears and more, then it may be a sign that something deeper is going on. In these situations, you should speak to a vet for further advice.

This is basically a condition that results in inflammation in the ear. It’s a pretty common condition that vets see a lot in their surgeries. The condition is characterized by a few key symptoms, including discharge, odor, head shaking, ear scratching and swollen, red ears.

The condition is caused by things like ear mites, trapped water, allergies and just having floppy ears. In most cases it tends to go away with time without much coercion but if a dog has experienced the condition then they may be more likely to get it again.

It’s a good idea to speak to your vet about potential treatments to ensure that it’s dealt with properly if it comes up again, since if it’s left untreated the ear inflammation can sometimes get worse. This can sometimes result in hearing issues.

This is another condition that is caused by inflammation in the ears. Primarily, it occurs because the walls of the blood vessels in the ear have become inflamed. This can result in some severe skin problems in the flaps of the dog’s ears.

If your dog has this condition, you may notice crusting skin, hair loss, fluid filled cysts, pain and itchiness in the affected ear and red or purple spots on the ears. We don’t really know what causes this condition most of the time.

Sometimes though it can happen because of an unusual immune response. You need to speak to a veterinarian as soon as possible if you notice any signs of this condition as you will then know how to treat it.

This condition will often occur if a pool of blood has emerged in between the cartilage and the skin of your dog’s ear flaps. This can cause pain, bleeding, swelling and skin discoloration.

The condition usually occurs thanks to self trauma, usually thanks to excessive head scratching or shaking. As such, it can usually occur thanks to an untreated infection like the ones mentioned previously in the article.

It’s important that you treat the haematoma straight away so that it doesn’t get infected and cause more damage to the ear. You usually can’t prevent haematomas, but it can help to treat the issues that have caused them.

Other Things to Think About

In addition to what we have mentioned above, it’s also worth noting a few other things. For instance, be wary if you have a dachshund or a terrier since they tend to be more likely to develop ear infections. Make sure that you are cleaning your dog’s ears regularly using a damp cloth, cotton swab and some soap. Keep an eye out for any potential signs of infection. Use a cone if you are noticing that your dog is scratching themselves a lot.

Dogs can shake their heads for a number of reasons. That’s why it’s important to always be vigilant. Keep an eye out for any signs of infection, and be sure to speak to your vet if there are any issues. Hopefully that will help to solve the head shaking problem.

Back to Top
Close
10 shares
We use cookies to ensure that we give you the best experience on our website. If you continue to use this site we will assume that you are happy with it.Ok