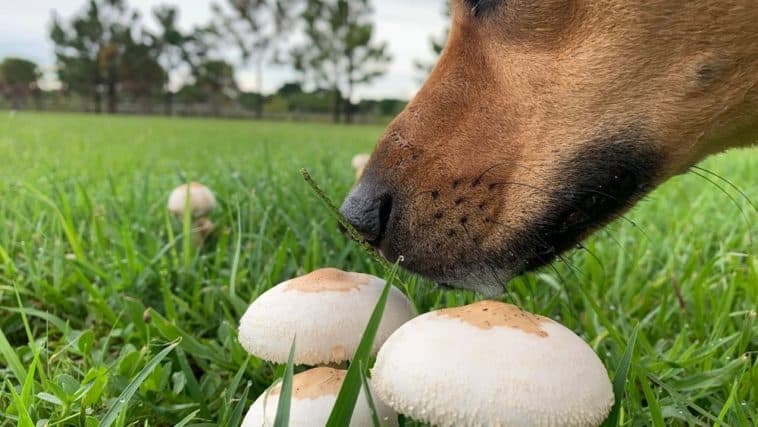 Some dogs can be picky eaters, which is honestly quite rare because the vast majority of canines will eat anything and everything they see as if they haven’t eaten in a year.

So if you’re sitting down, having a meal, and your dog is nearby, chances are your dog will give you the good old puppy eye look to beg for food.

The problem is, we very often cave in and give them a bite, because they’re cute, and most people like sharing food with their dogs. An even bigger problem? Not all food is safe for dogs.

So what about cooked mushrooms? Can dogs eat mushrooms cooked or otherwise? Let’s say you have a pile of them on your plate, after a big cooked breakfast. Can you give a bunch of them to your dog? The answer depends.

Most mushrooms that you buy in the store to eat, are completely safe for dogs. It won’t cause your dog any harm to eat a few mushrooms, and it should be completely fine.

However, dogs don’t need to eat mushrooms, and it isn’t really a part of their normal diet, so you shouldn’t make a habit of it.

So as a general rule, we recommend you avoid giving your dog cooked mushrooms unless they are completely plain.

What happens if my dog eats cooked mushrooms?

Okay, let’s say your dog is giving you extra cute puppy eyes, and you really can’t resist, so you end up giving them cooked mushrooms despite knowing that you probably shouldn’t. What is going to happen?

If the mushrooms were cooked to be plain, then your dog will mostly be alright, and nothing should happen.

That is, as long as you haven’t given your dog an entire plate full of cooked mushrooms, as that would be way too much and it will probably cause your dog to vomit them back up, due to the digestive system not being used to them.

If the cooked mushrooms were seasoned or had other ingredients with them, then your dog might suffer from an upset stomach, vomiting, and diarrhea.

Usually, nothing too grave will happen, and after a few days, your dog should feel fine again. Just make sure not to give them cooked mushrooms again.

The main things to look out for and avoid in cooked mushrooms that you’re giving your dog are excessive amounts of butter and milk-based products, as most dogs are lactose intolerant.

You also need to avoid large amounts of salt or spicy seasoning, as this can become toxic to dogs and cause other complications.

Should you feed your dog cooked mushrooms?

If you give your dog cooked mushrooms that are from the supermarket, and completely plain, then your dog will be fine. However, this doesn’t mean that you should make a habit out of it.

Mushrooms are not part of a dog’s natural diet, and dogs do not need to eat mushrooms.

Although they won’t necessarily cause any harm, if the cooked mushrooms are mixed with other ingredients, they can cause an upset stomach and vomiting, amongst other complications.

And as mushrooms really don’t add much to a dog’s diet, it really isn’t worth the risk.

So our answer is no. You should not feed your dog cooked mushrooms. If you were just eating some plain mushrooms, and your dog has eaten a few, then you don’t have to worry.

Do dogs know to avoid mushrooms?

Usually, if food is bad for an animal, that animal will have an instinctive mechanism or sense that makes that food not look enticing or appetizing, to avoid the risk.

As a general rule, dogs will not try to eat mushrooms because they do not look appealing. They actually have a very strong scent that dogs dislike, as it is very musty and earthy. And this is how dogs know to avoid it, and how they know that it is not part of their normal diet.

However, dogs are also known for eating basically everything, especially if they’re used to being in the house and eating all the scraps from the table.

Your dog might not listen to that sense of smell, and might instantly try to eat the mushrooms, as it does with all other food within reach.

So basically, you should never leave it up to the dog, because dogs do not know what is best for them. You are the owner, you know about your dog’s dietary needs, and you’re in charge of the food.

Don’t give your dog the option to eat the cooked mushrooms, or else it might do as such and end up with an upset stomach!

Are backyard mushrooms poisonous to dogs?

You should never let your dog eat any mushrooms found in the wild or growing in your backyard unless you know 100% that they are safe.

And even then, mushrooms are not a part of a dog’s diet, so you should avoid your dog from eating any mushrooms at all, even when safe.

Just in case, you should check your backyard and take the necessary precautions in order to avoid your dog from eating plants or similar that grow there, without your supervision.

Back to Top
Close
12 shares