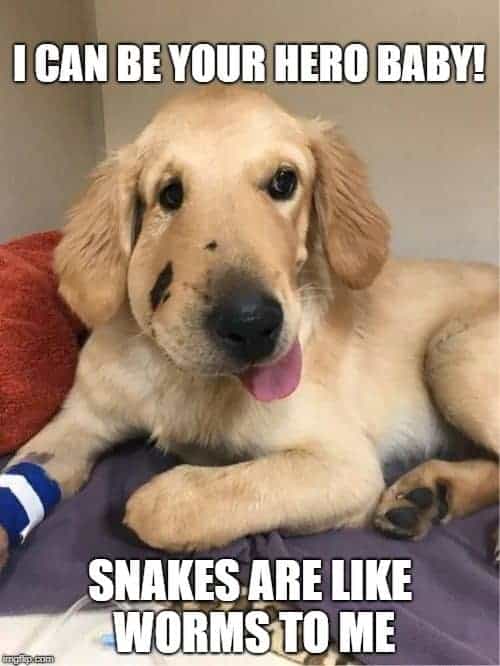 You heard it right, a dog saves owner from snake. A golden retriever puppy has taken the world by storm by doing something unthinkably brave for his owner. When Paula Godwin took Todd in after he was put up for adoption on Craigslist, she would never have thought that this perfect pooch would become a global sensation after he put his life on the line for his new mama.

Goldwin, 44, was taking her two dogs for one of their daily walks along 7th street which runs through the Anthem desert in Arizona in the Southwest of the United States. Her older dog, Cooper, was bounding up ahead, closely followed by Godwin and the newest addition to the family, a six-month-old golden retriever puppy named Todd.

They were following along their usual route, when something caught Godwin’s eye as it flashed beneath her. Without first realizing, she had stood on a rattlesnake! Her fearless pooch, without any thought for his own safety, leapt out in front of Godwin, standing his ground between her legs and the deadly snake.

“I didn’t see the snake by my foot, it was so camouflaged in the road. It was a gray-speckled, gray and white rattlesnake.”” Godwin said. “As I was walking, Todd bolted by my leg and that’s when he was hit by the rattlesnake.” The hero pup took the full force of the snake’s bite, being painfully bitten on the side of his face.

Godwin immediately took her poor pooch to the hospital within ten minutes of receiving the deadly rattlesnake bite. “I picked him up and ran down the hill, called the animal hospital where I live nearby and told them that I would be there in five minutes,” she said.

Todd spent more than 12 hours in the veterinary hospital, while staff gave him anti-venom medicine. Animal health officials representing the hospital have assured the public that Todd is going to make a full recovery, and that the swelling of his face will soon go down. “He for sure saved me from being bit.”

In a Facebook post, Godwin hailed Todd “a hero” alongside images of the puppy with a swollen face as a result of the snake’s venom. “He for sure saved me from getting bit,” announced Paula in a video that she posted on her Facebook page. “He’s definitely my hero.”

“Todd’s doing so well he is a wonder to me how he is healing,” added Paula in a later post on Facebook. “Just a thank you to all the support Your kindness and support is truly a blessing.”

Paula has set up a GoFundMe page to help other pet owners whose animals may need expensive treatment as the result of an emergency. Paula said of the fundraiser: “Todd wants to help more puppies that may need help. Donations are not towards Todd’s bill but for those in need of help in paying unexpected vet bills.”

If you think this puppy is a hero and you enjoyed hearing about his tale of fearless bravery, then please SHARE this story!

Back to Top
Close
175 shares
We use cookies to ensure that we give you the best experience on our website. If you continue to use this site we will assume that you are happy with it.Ok