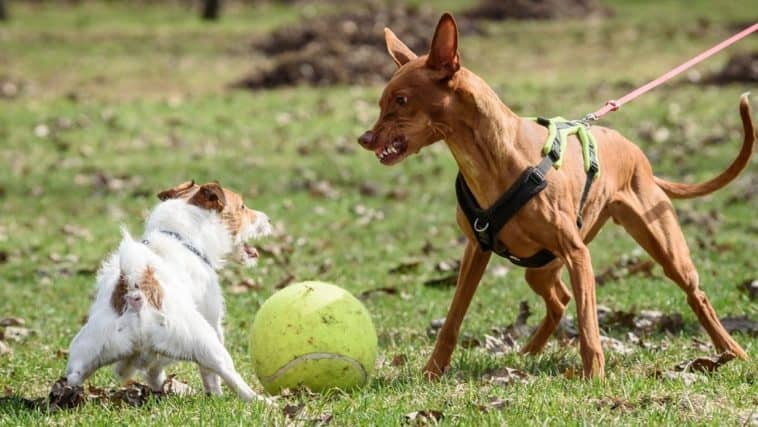 Taking your new dog or puppy for their first walk can be a fun yet stressful experience, especially as you begin to learn all of your pooch’s various quirks and mannerisms.

When a dog is exposed to the natural world for the first time, they can be excited and energetic, which means they can begin to exhibit strange behaviours and actions.

If you have taken your dog to the park for the first time, then you have probably noticed some of these behaviours, which can include your dog chasing other dogs in the area, or becoming very interested in passersby.

And although this is completely normal, there can be certain instances where you may begin to question your dog’s integrity.

The most concerning of these instances is when your dog begins to bark at random strangers, and you slowly begin to realize that these strangers are exclusively people of color.

In situations such as this, you may begin to wonder whether your dog’s behaviour has been fulled by some kind of racial discrimination, or if your beloved pooch is just blatantly racist.

But is this even possible? Down below we have compiled some handy information regarding the subject of dogs and racism – whether it is possible for dogs to be racist and how you can stop it if the issue arises.

Can Dogs Be Racist?

The word ‘racist’ is an adjective used to describe people who show or feel discrimination against people of other races, with their primary belief being that one particular race is superior to the others.

Although it can be hard to accept, we live in a world where racism is not only prevalent but where the practice has also been the backbone of many societal systems.

So like it or not, you and your dog live in a world that is filled with racism, and there’s very little you can do about that.

But does this mean your dog can be racist? Well, that could be considered a loaded question. But if you are looking for a simple answer, then yes, dogs can be “racist”, or at least show aggression towards people from different racial backgrounds.

However, to say that your dog is racist only helps to downplay a very serious issue that affects thousands of people every day. The concept alone also presents the idea that dogs have the same historical and emotional understanding as humans, which they decidedly do not.

Dogs do not know human history and this means that they have no way of comprehending the concept of racism as it pertains to colonization and systematic practice.

So when your dog shows aggression or trepidation towards a person of a different race, this does not mean that they believe this person is dangerous solely because of the color of their skin.

Nor does it mean that your dog believes one race is superior to all the others, as again they have no understanding of race or racism.

Why Is Your Dog Racist?

Although calling your dog racist is inaccurate, it can be a quick and easy way to explain their strange behaviour towards people of color.

However, as we have previously discussed, dogs have no concept of race and this means that their aggression or fear could be fuelled by something else.

For example, if you have adopted a much older dog, then you may assume that their “racism” is the result of negative past experiences with people of color. And although this theory is not entirely unfounded, it is another generalization that could be proved wrong.

When it comes to most cases of doggy racism, your canine’s aggression could be the result of their fear, as well as exposure to people and strangers they do not recognize.

This is usually prevalent in older dogs, who often suffer from a condition called neophobia, which is the fear of new and strange things.

You have to understand that dogs live in very small worlds, with only a limited selection of people and locations making up their life experiences.

So if a dog has been raised in a household made up of only one race, then chances are their reaction towards people who look, sound and dress differently will not be positive.

Another reason why your dog may react negatively towards a person of color is because of your own reaction.

Dogs are very good at detecting the mood and emotions of their owners, so if you suddenly become tense around a person of color, then your dog could react in the same way, or even move to defend you from the stranger.

We understand that this may not be something that you want to hear, but dogs are very capable of mirroring their owner’s behaviour, and this may leave you questioning your own beliefs and morals.

How To Stop Your Dog’s Racism?

If you believe that your dog could be racist (or at least as racist as a dog can be) then various methods can be used to combat the problem. Down below we have outlined the two most effective ways you can fix your dog’s “racism”.

If you have friends of a different race that make your dog feel uncomfortable, then you can ask them to help fix the overall issue of your dog’s racism.

This method is simple, ask your friend to stand close by and see if your dog notices them. If they do, then reward your dog by giving them a treat.

For this method, your friend should not make an emotional or physical connection with your dog, as you are trying to make them feel comfortable around all strangers.

This method helps teach your dog that seeing a person of color equals a treat, which helps to reinforce positive feelings and associations.

Once your dog can take treats within 10 feet of your friend, you can then begin establishing a relationship between the two parties.

For this method, you should ask your friend to toss treats to your dog when they have noticed them. Make sure that your friend throws the treats behind the dog, as the separation will help to relieve social pressure.

This method teaches the dog that strangers can be kind and it helps to reinforce the positive teachings of the first method.

Although these methods can be effective in dealing with your dog’s racism, they should only be used to make them feel comfortable around strangers.

If your dog is acting aggressively towards a romantic partner or neighbour of a different race, then you may need to seek the help of a professional.

Back to Top
Close
0 shares