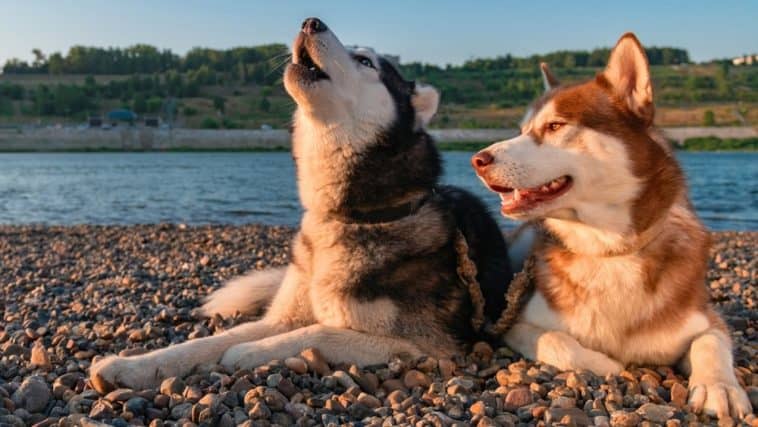 Have you ever been sitting listening to music only to hear your furry best friend start howling to the tune? It seems like they are singing along but, is this really the case? Well, don’t be alarmed because this is an all too common occurrence.

Just head to YouTube and you will find millions of videos showing dogs howling along to classical pieces of music, jazz, hip hop, and pop music. Maybe they’re just fans or maybe they don’t like the tone. It’s time to find out why they do this!

In today’s article, we are going to find out once and for all. We have researched different studies and found some possible reasons why dogs show off their vocal prowess with music.

Just remember, dogs are descended from wolves (yes, even that chihuahua down the street from you is a wolf’s ancestor). While it’s definitely entertaining and cute to see our dogs howl to different tunes, let’s discover why they do it.

Who do dogs howl?

Howling is a means of vocal communication between dogs. It has been the study in the Canidae (biological family of dog-like carnivores) family for many years and continues to be. Canids such as wolves, coyotes, jackals, and dogs communicate socially through the use of howling.

Such studies on howling and pack separation have helped us understand and explain why many dogs howl when they are left alone at home. This is especially evident when you leave the house for work for the day and your dog begins to howl soon after you leave.

Some behavioral experts believe that there could be other reasons behind a dog’s howl aside from separation anxiety and their need to find their pack or loved ones.

It is believed that dogs and wolves may howl as a form of pack bonding. This is mostly when they are in physical or emotional distress. More often than not, it seems that they howl to claim a certain territory as their own.

Some dog breeds are more prone to howling than others, whether it’s along with music or not. Let’s take a closer look at these breeds below.

If you type in “dog howling” on YouTube, you will undoubtedly see many Siberian Huskies in the videos. Many experts agree that dogs that tend to howl more are genetically closest to their wolf ancestors. These include Huskies, Malamutes, and other northern breeds.

This isn’t to say other dog breeds do not howl because they do. Hunting dogs love a howl or “bay” but these are generally trained to do so. This is to alert hunters that they have tracked down their prey animals.

The dog breeds that tend to howl the most are:

Many other dogs howl, including smaller breeds, but these shown above are known for the most frequent and loudest howling out of all dog breeds.

Why do dogs howl to music?

So, now we know the possible reasons behind why dogs howl, are they good enough explanations as to why they howl at music?

Dog behavior experts believe that howling to and with music is closely linked to bonding behavior. When dogs hear certain high-pitched sounds, such as music or fire engines, their instinct is to howl.

In other words, they can’t help it, it’s built into them from their wolf ancestors.

The question of whether dogs like the music they’re howling to is still up for debate. Don’t forget, dogs tend to howl at other sounds such as police sirens or even other dogs.

At the present moment, scientists still do not know if this howling is a sign that they like what they’re hearing or are distressed by it.

It could just be that certain sounds cause dogs to howl in response, whether the sound is music or another canine.

The most common kinds of music to make dogs howl

Believe it or not but there are certain types of music genres that are more likely to elicit a howling response from dogs.

A study by dog behavior expert Stanley Coren found that dogs are more likely to howl when hearing wind instruments, especially those with a reed such as saxophones and clarinets. Other common musical instruments include the violin and the human voice.

If you have ever started singing and your dog has joined in with a howl, it could be that they love your voice. Or, it could be the opposite. You can be the judge of that!

One recent study found that shelter dogs were less stressed when listening to reggae music and soft rock. So, the next time your dog seems a little out of sorts, chuck on some Bob Marley and it could calm them down.

Nonetheless, dogs like to listen to all kinds of music. Some love to howl along to rap while others prefer the soothing tones of a classical piano.

Whether your dog likes Jay Z or a bit of Mozart doesn’t matter. There doesn’t seem to be any evidence that it negatively affects dogs. It could just be built-in and part of their genetics.

From singing in the shower to recorded instruments, dogs howl along to all kinds of music. If your dog always howls when you start singing, try and think of it as a compliment.

It could just be your dog’s way of communicating with you and connecting with his or her beloved family member.

Over thousands of years, humans have strengthened our social bonds through singing and playing music together. Unbeknown to us, dogs have been howling along the entire time too.

Back to Top
Close
0 shares