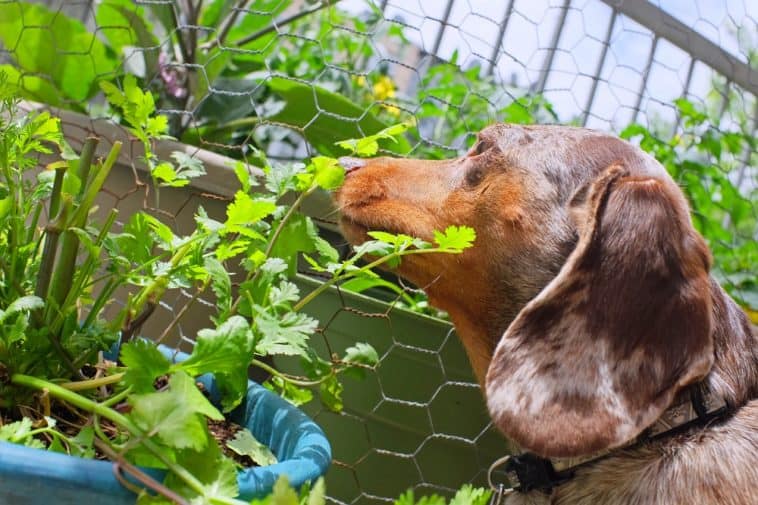 When it comes to feeding your dog certain herbs, you may be feeling hesitant due to hearing that certain herbs are harmful and even toxic for your pup.

However, according to ASPCA (the American Society for the Prevention of Cruelty to Animals), cilantro is non-toxic to dogs unless they suffer from plant-based allergies.

Cilantro – in small quantities – can not only make a tasty treat for your pooch, but also has associated health benefits.

In this article, we’ll be exploring the benefits of feeding your dog cilantro every so often, as well as how to feed it to them. First of all though, let’s take a closer look at cilantro and its origins.

Cilantro – also known as coriander, dhania, Mexican parsley, and Chinese parsley – is a member of the parsley family.

Its dried seeds are well-known as coriander, but the leaves are usually used fresh as the flavor isn’t preserved well when the herb is dried. Cilantro often features in Mexican, Indian, and Middle Eastern recipes.

Eaten fresh, cilantro has a pungent, lemony taste that is also a little peppery. To a certain percentage of the population, it tastes soapy, and therefore is something of a love-hate herb!

The soapy taste comes from the natural aldehyde chemical in the leaves, which is also produced during soapmaking and by some insects such as bedbugs.

Not all people detect these aldehydes, which is why some of us only taste cilantro’s zesty flavor.

Cholesterol-free cilantro is low in calories (only two calories per one-half cup) and provides an excellent source of vitamins and minerals for your pooch. As well as this, there are several other health benefits associated with the herb, including:

Research has indicated that cilantro may help clean your dog’s insides of heavy metals, including toxic mercury.

The herb’s compounds bind to poisonous metals accumulated in body tissues and facilitate their excretion. A small amount of cilantro added to your pup’s daily meal will help regular defecation and natural body detoxification.

Cilantro is packed full of potent antioxidants that protect the body’s cells from potentially harmful free radicals. Antioxidants can reduce inflammation and reduce your dog’s chance of developing life-threatening diseases such as cancer.

Cilantro possesses powerful antibacterial and antifungal properties, and a small amount in your dog’s meal can help fight off infections, particularly those related to the digestive system.

Fresh cilantro leaves have also been proven to kill Salmonella enterica and can help protect against foodborne infections.

Both cilantro and coriander may potentially reduce the formation of blood clots, lower blood pressure, and improve overall heart health to lower your pooch’s risk of heart disease.

Cilantro was traditionally used as a digestive aid, especially for treating an upset stomach. This makes it especially beneficial for breeds that suffer from excess gases and digestive problems.

Ill or senior dogs can be prone to sleeping problems. Cilantro is an easy way to offer your dog sleep-prolonging effects, and, unlike some medications you can use to reach the same effect, cilantro has no negative neurotoxic effects.

Cilantro may be useful for helping your dog’s stress or anxiety levels, as it’s a known mood and energy booster.

Cilantro is rich in vitamin A which can help maintain healthy vision. It will also protect the skin against oxidative radicals and prevent possible issues by repairing damaged skin cells.

Serving Cilantro to your Dog

Any of these will work fine for your pooch, but you should be aware that seeds and powder contain lower vitamin and mineral levels than fresh leaves. So to fully reap the benefits of cilantro, we recommend using fresh cilantro rather than the dried versions.

The best option for feeding your dog cilantro is to simply chop up fresh cilantro leaves and add them to the dog’s regular meal. As with introducing any new food to your dog’s diet, use a small amount until determining the right proportion that won’t overpower your dog’s meal.

If your pup is notoriously fussy, try a pinch of powdered cilantro over the meat it enjoys eating.

If using dry cilantro, try combining half a teaspoon with your dog’s wet food before serving. It’s also possible to use a cilantro oil extract. If using the oil form, simply add a drop to your dog’s water bowl rather than its food.

You can also offer your dog cilantro in the food you have cooked for yourself – provided it’s safe for dogs to consume, of course.

For example, lime-cilantro rice is a great option that’s both delicious and nutritious. You may need to reduce the amount of cilantro in the dish if you’ll be sharing it with your pooch, however, as this recipe calls for 0.5 cups of chopped cilantro for four servings.

What to not feed your dog

While fresh cilantro leaves are fine for your dog, never offer them dishes such as salsa or guacamole. A lot of human food that’s seasoned with cilantro often contains other ingredients that can be toxic for dogs, such as garlic, onions, leek, and chives.

Cilantro is a delicious herb that’s packed full of health benefits for both you and your dog. It can be incorporated into your pooch’s daily meal to aid digestion, fight free radicals and freshen breath, along with offering a host of other benefits for your pet.

Just be sure to only feed cilantro to your dog in small amounts, and if you have any concerns about introducing it to their diet, consult with your veterinarian before doing so.

Back to Top
Close
11 shares
We use cookies to ensure that we give you the best experience on our website. If you continue to use this site we will assume that you are happy with it.Ok