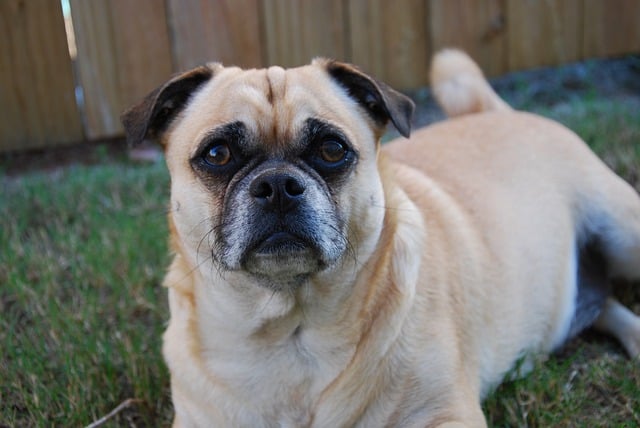 If you are thinking of a new dog and are not sure where you can find a pug – how about a dog that looks like a pug?

There are many dogs that are of a similar shape, size, or color to a pug. So whichever trait you are most looking for in your new potential hound – we will have listed it here.

Pug look-alike dogs come in all sorts of disguises – so browse this list right now for some ideas.

French bulldog wins first place for our list of dogs that look like pugs – and the match is almost perfect.

Frenchies are a very popular breed right now and there will be plenty of pups to choose from.

They have a similar face and overall body shape to pugs – as well as coming in a wide range of colors.

With their pricked-up ears they are alert and active – and love and adventure.

This breed has a stately history being originally from Asia and traveling with the Phoenicians to Europe.

However, they were gradually reduced in size from their mastiff origins to become prized ratter in Parisian suburbs – actually being crossed with the pug itself to arrive at the portly creatures we find today.

Being developed in their name-sake city – you wouldn’t believe that Boston terriers were originally bred as fighting dogs?

Almost identical in size and weight to pugs – they are just as stubby-nosed and have an adorable screw tail.

They don’t come in the same fawn color – but their characters are just as quirky. They also have tiny dainty toes and those huge pleading eyes.

Easy to carry, they make great house dogs – and love being part of the family.

Much more lively than a pug and able to exercise far more in the warmer weather and over longer distances – they will keep you busy.

Small Brabant is a real rarity – but with a close relationship to the pug. The upturned face is unmistakable.

They are very confident, intelligent dogs that make great pets – and are as light as a feather.

They can be strong-willed though – so be prepared for them to make their own rules.

They are the short-haired version of the Brussels Griffon – same cute face but with a beard!

If you want something the same color as a pug – but more wrinkly – miniature shar-pei is the one-up version.

This very unusual breed comes in two similar shades to the pug – but maybe not as chubby?

They are super-covered in wrinkles and crinkles and have that tipped-up tail.

Their coat is quite unique to touch – rough like a pug but a bit more brush-like – and they need just as much skincare.

The standard Shar-pei also makes the list – but is 50% bigger. Unless you were looking for a bigger size?

If the size isn’t an issue – but you just love the fawn color and black points – then buckle up for Bullmastiff!

If you want giant-sized pug look-alike dogs – then these colossus dogs could be that gap-filler.

From the same mastiff stock as early pugs – these 130lb dogs will give you that ‘wow’ factor – especially in a pair. Less strong-willed and easier to train for sure.

However, being classed as a giant breed – this alternative certainly isn’t going to be a lap dog!

If you just love the chubbier dog and that short nose – then why not bulk it up?

The classic look of muscle and friendly grin are combined in English Bulldog – a real beast of a pup.

Although mainly in tan-and-white only you won’t be disappointed on appearance.

Just maybe a bit harder to pick up under one arm! There is a designer ‘miniature bulldog’ out there if you search a bit harder.

Although, if you buy from smaller stock, they can be the same height as a pug – still around 3 times heavier!

Pekingese is one of the world’s oldest dog breeds – and with the same cheekiness, you expect from a pug!

Albeit with a fuller coat – the character of this breed will have you in stitches.

They are an affectionate, loving breed and a real companion. Having the same care requirements as a pug – this adorable substitute could be your perfect match.

Like pugs, hot weather and too much exercise could be a strain for this breed.

But if they are a pampered lap dog – then none of that matters. Just watch the waistline!

Another ancient breed – but with a slightly longer nose and less tongue!

Not as rotund as a pug – Tibetan Spaniel will make a great apartment-dog. They bond well with their owner and are very energetic at times.

They can certainly be more active outdoors than a pug could be if you want to make the most of summer strolls?

They do need a bit of extra grooming for their silky coat though – but they will love you for it.

Staffordshire Bull Terrier is a hugely popular dog that makes a great family pet – and a best friend.

Available in a wide range of colors – including fawn and black – there are those with a shorter-nose if you want it to be more pug-like.

Generally, a more athletic breed and having retained more of their muscle than the pug – these dogs can be much more active outdoors.

This breed is widely found in rescues and shows no signs of its traditional roots in a loving family home.

With a head like a pug – but set on the legs of a ballet dancer – the Japanese chin is adorable.

Owned by a royalty on opposite sides of the globe – you won’t be compromising on the character with this choice.

Often described as ‘rambunctious’ these will keep you on your toes – just like a pug.

Brimming over with character and totally devoted to their owners – you could carry them around their entire lives and they would just love you.

If you want something more outdoorsy but with that cute squish face – these might be the ones?

Such a devoted dog, the adoration from royalty continued and this little one became a firm favorite.

Incredibly devoted, loyal, and even-tempered – they really do have a heart of gold.

With fluffy dangly ears and huge dark eyes – who could resist their charm?

If you want total fluff – and eternal love – then maybe this is the face of an angel?

Pomeranian is a really tiny spitz breed from the Pomeranian area of Germany – these companion fluffballs are certainly individuals.

Being a toy breed, they are ready for city-living and all the devotion available from their human slaves.

Grooming isn’t as bad as it would appear – but training needs a firm hand if you don’t want to be in charge of an adorable demon!

Always in the Top 10 most popular breeds recently – and they don’t just come in bright orange if that’s not your thing?

Want the cuteness of a pug in miniature – then look no further.

This much-loved Mexican-linked breed is adored the world over – and you can see why.

Heroic, courageous, and proud – but with devotion beyond all others. Shortnose, big eyes, tiny feet – but a loud bark! Chihuahua makes a great guard dog would you believe.

The smallest dog in the world – so you could have 4 of these instead of one pug?

The Affenpinscher is affectionately known as the ‘monkey-like terrier’ – you can bet you are in for some fun.

Just as cheeky as a pug, these wire-haired characters are certainly something worth considering if you like all the attributes of a pug – just without the traditional fawn color.

Exuberant and somewhat obstinate – you won’t have an easy ride – but you will have a great journey.

A loyal friend to humans – but maybe a bit too much of a terrier for every household?

Found depicted in art across the globe – you won’t be able to help but take pictures of these chaps yourself!

If you want something that is half pug – then the choice is endless.

Unlike pure breeds though, these designer dogs are guaranteed to look the same as each other – or their parent breeds.

However, some lines have been perfected over time and are no longer just random first-crosses – they are so much more. Take the miniature bulldog (pug x English Bulldog) – the best of both worlds.

Not able to be shown as either main breed in competitions – these dogs can still have their characters in spades. So pug, part pug, or pug look-alike dogs – you get to choose!

16 Dog Breeds That Have Green Eyes (With Pictures)

Back to Top
Close
101 shares
We use cookies to ensure that we give you the best experience on our website. If you continue to use this site we will assume that you are happy with it.Ok