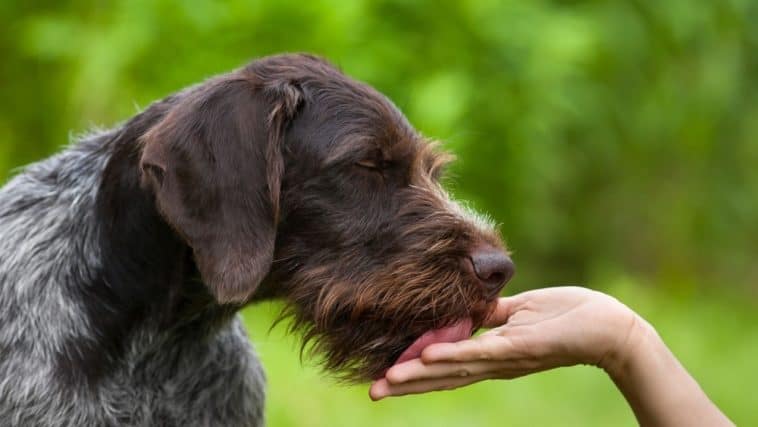 What Does It Mean When A Dog Licks Your Hand?

Dogs use their senses of taste, smell and touch to communicate with their owners. More often than not, this communication involves a significant amount of licking, especially on the hands and face.

But, what does it mean when your dog repeatedly licks your hand? And, why do they like to do it?

This guide will take an in-depth look at what it means when a dog licks your hand, including four of the main reasons why they do so. We’ll also look to explain how you can prevent your dog from engaging in the practice.

Licking is one of the most powerful signs of affection that a dog can give. They often use it as a means to greet people, especially those they’re familiar and comfortable with.

If you’re a dog owner and returning home from a long day at work, you’ll likely have experienced the pure, unbridled excitement of your pooch as you step through the door and they plaster your hands in affectionate licks.

Think of it as the equivalent of hugging a family member or a friend that you haven’t seen for a while. For your dog, licking your hand after a bit of time apart is their way of saying that they’ve missed you.

In addition to their affectionate greetings, licking may also feel good to your dog as it can release endorphins.

Dogs are descended from wolves, so it’s normal for their instinctual pack behavior to often manifest itself in their relationship with owners.

All packs typically have an alpha who is in charge. This alpha is tasked with looking after and holding authority over the other members of the pack. In order to show their submission to the alpha wolf, members of the pack will lick them in return.

Therefore, it makes sense that your dog may do the same to you as their owner. You’re their primary caregiver and provider, so by licking your hand, they’re effectively treating you as their alpha and demonstrating their obedience and submission to you.

If your pooch licks your hand obsessively it may be a sign that they’re suffering from an underlying issue.

With this in mind, it’s worth contextualizing their licking habits. For example, if your dog is a rescue and has been badly treated in the past, the licking could be a sign of separation anxiety.

Likewise, it could similarly indicate that your dog has an anxious disposition or is in a situation or environment they feel nervous and uncomfortable with.

All repetitive behavioral problems you notice should be discussed with a trainer or vet, especially if your dog has a tendency to constantly lick your hand.

Dogs will often lick your hands to remind them of when they were a puppy. All dogs are licked by their mother to be groomed and nurtured during the early stages of their life.

Just like humans, dogs like to reminisce about the good times, and by licking your hands, they’re effectively grooming you, repeating a behavior that’s closely associated with their upbringing.

For your dog, this provides them with many of the same feelings of safety and security that they experienced as a young puppy being licked by their mother and licking their fellow siblings.

What’s So Special About Hands?

Dogs are blessed with heightened senses, so by licking your hand, they can tell who you’ve interacted with, where you’ve been, and even what you had to eat for lunch.

Another reason why hands, specifically, are so popular to lick is the simple fact that they usually taste good to dogs. Hands are coated with natural salts, and if you’ve recently eaten some food or handled treats, your dog will love to lick your hands in order to taste the remnants.

How To Stop Your Dog Licking Your Hand

If you want to stop your dog from licking you and others, the most effective solution is to train them not to do it.

The worst thing to do is stroke them or reward them with a treat after they’ve licked your hand as this will give them a positive reinforcement message. If a dog feels rewarded for their behavior, they’ll continue to act in the same way.

One method is to remove any encouragement and actively deter them with an authoritative “NO”. This is an easy way to stop them if the licking becomes a problem.

However, as with all types of dog training, changes to behavior take time and effort. If you’re in need of a quick-fix, you could always try occupying them with a chew toy or something similar to distract them from your hands.

Can you get ill from a dog licking your hands?

With the majority of dogs being known to lick dirt and feces, this is an understandable concern for many. However, for most healthy people, the germs present in a dog’s mouth aren’t enough to cause any significant illness.

On the other hand, those with a compromised immune system may be susceptible to picking up an illness from these germs. Therefore, they should steer clear of dogs if possible.

All things considered, everyone should thoroughly wash their hands after being licked by a dog. Doing so eliminates all risks of infection and illness.

Why does my dog lick my wounds?

Many animals have a natural tendency to lick their own wounds as part of the healing process. They may try to do the same with your cuts and wounds, but it’s important to encourage them not to do so as this can lead to infection.

Back to Top
Close
16 shares