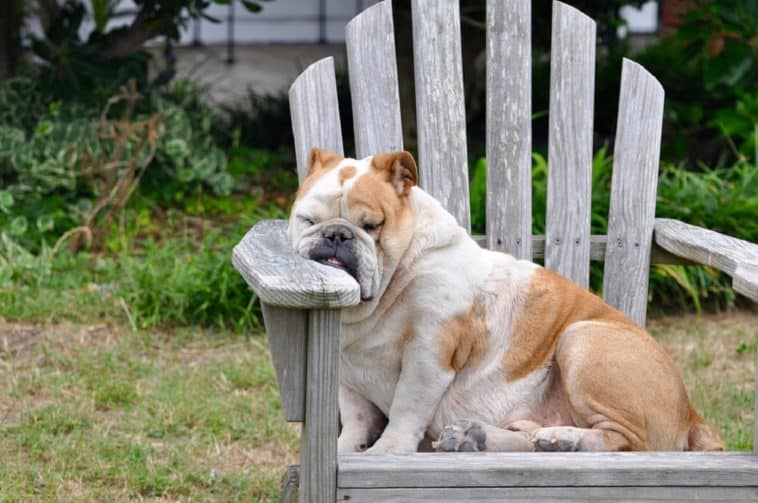 Dogs can do the strangest things sometimes. From running around with the trash to playing with human underwear, it’s hard not to be surprised by them. Perhaps one of the strangest things that dogs do is actually when they are unconscious though – they bark in their sleep.

Not just barking either – you may hear your dog growling, whimpering, and making a lot of other noises. They may even look like they’re trying to ride a bicycle as they sleep!

You may be wondering why this happens. After all, it can certainly look very strange, and you may be concerned. The short story is that you don’t need to be concerned, as it’s completely natural.

With that being said though, it’s still worth knowing why dogs bark in their sleep. Here’s everything you need to know.

The Reason That Dogs Bark In Their Sleep

Ultimately, the reason that dogs bark in their sleep is pretty similar to why you may hear a human shouting or making noise in their sleep. It’s because they are having a dream. In fact, the sleep cycle of a dog replicates that of a human in many respects.

Your dog will start their slumped with some relaxed wakefulness and then they will drop off into light sleep. Eventually they will enter something called REM sleep, and flit in between REM sleep and non-REM Sleep.

In case you didn’t know, both humans and dogs will dream when they are in REM sleep. And we all know what happens in a dream! Dogs have dreams too, sometimes about issues that pertain to their waking lives.

Sometimes these dreams can be nightmares too. The dreams can occasionally mean that they make noise, since they would also make noise in response to the same stimuli in real life.

Not all dogs dream the same way either. Sometimes a dog might be particularly noisy when they dream, whereas others may not make a lot of noise. Small dogs generally tend to be noisier when they are sleeping since they spend a lot more time in REM sleep than their larger counterparts.

Should I Do Anything When My Dog Barks In Their Sleep?

It’s a good idea to leave your dog alone if you hear them barking or making any other kind of noise while they are sleeping. It’s a totally normal and natural occurrence, and it certainly isn’t hurting them. If your dog seems particularly bothered by the dream then it could be that it’s actually a nightmare. That still doesn’t mean that you should wake them up.

In fact, waking your dog may do more harm than good since it can be disorienting for them. It may be hard for them to return to sleep. Some dogs may even snap if you disturb them when they sleep.

Of course, there are exceptions to this rule. That is, if you notice that your dog is developing REM Behavior Disorders. This may mean that your dog is physically running around in their sleep chasing objects that don’t sleep and then they wake up as if nothing occurred. In these cases, it’s a good idea to speak to a vet for further advice.

My Dog’s Barking Is Waking Me Up – What Should I Do?

It’s cute that your dog is twitching and moving in their sleep, but it goes without saying that sometimes it can be quite disruptive to your own sleep if you keep hearing your dog barking and marking noises while they sleep. Thankfully, there are some things that you should do.

One thing worth noting is that you shouldn’t give your dog pills to minimize their barking. These should only be provided when the circumstances are dire – barking at night is hardly one of those circumstances.

Likewise, don’t give your dog the same medication that you would take. You can cause some real problems for your dog if you give them human sleeping pills, as they simply weren’t designed for dogs.

The best thing to do is to find a way to ensure that your dog can continue to dream, but it causes as little disruption to your sleep as possible. For instance, you could move their bed further from people that are sleeping to minimize the noise.

Are They Actually Sleeping?

It seems like a weird thing to ask, but is your dog actually sleeping? You may interpret the noises as sleeping noises, but in reality it may be that your dog isn’t sleeping at all. Instead, they may be making noise to alert you to something, or they could even be upset.

Dogs don’t tend to get insomnia very often, but when they do it can alert you to deeper issues like pain, anxiety and more. If your dog isn’t sleeping properly then it’s worth speaking to a veterinarian for further advice.

Sometimes your dog may not be sleeping at night because they’re sleeping too much during the day. Dogs generally only need between 12 and 14 hours of sleep every day. They shouldn’t be spending the entire day sleeping – the exception is with puppies and elderly dogs.

Make sure that your dog has a comfortable bed to sleep on, and ensure that your dog is getting plenty of Omega 3 fatty acids if they are anxious. By making simple adjustments, you can help your dog to rest easily during the night.

And that’s it – that’s all you need to know about why dogs bark in their sleep. The honest truth is that it’s totally normal for your dog to bark in their sleep, but if it’s causing you any concern then it’s always worthwhile to speak to a vet for further advice.

They can help you to figure out what to do next. Furthermore, let your dog dream – the barking and noises will stop eventually, and your dog will be happy that you didn’t disturb their slumber.

Back to Top
Close
24 shares