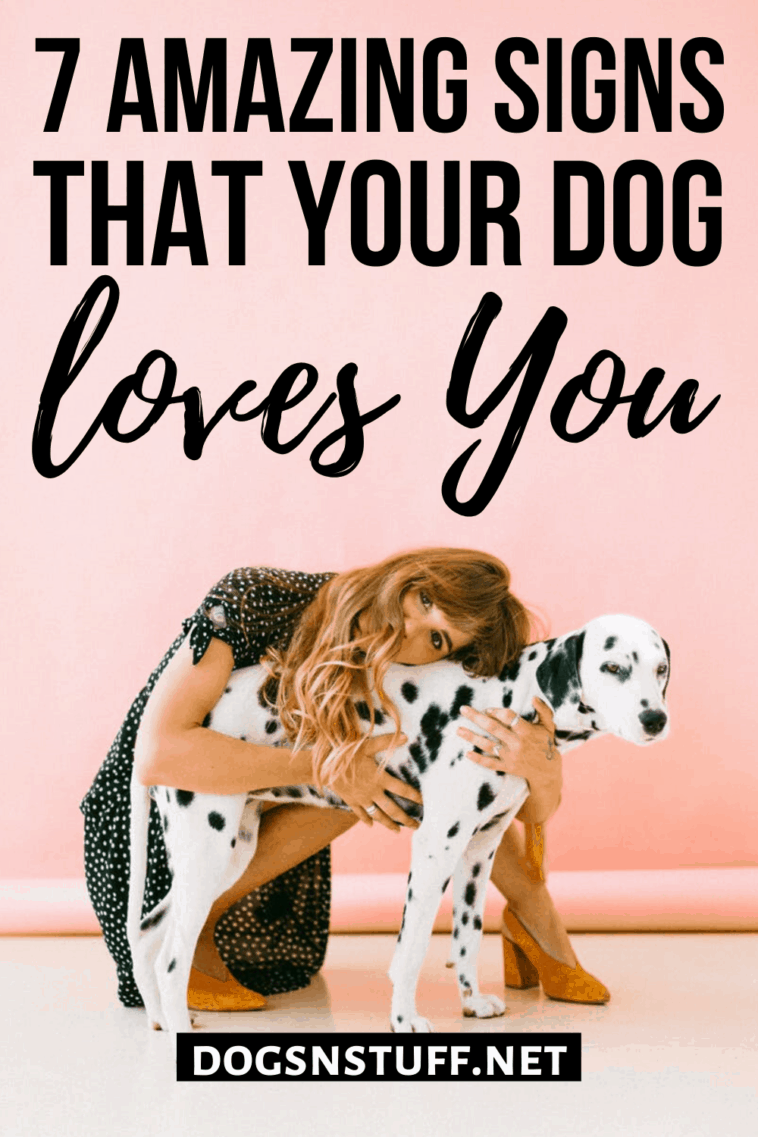 Our dogs are our constant companion. We love them with all our hearts.

But do you sometimes find yourself looking for signs your dog loves you too?

There are the obvious signs your dog loves you. Jumping up and down when you walk in the door.

Running towards you when you are out for a walk. But as it turns out, there are more obvious signs of affection you can look out for too.

Signs your dog loves you: Wiggling their eyebrows

Researchers from Japan revealed that dogs lift and wiggle their left-hand brow when they first see someone they love.

The researchers observed that as a dog’s owner was brought into the room, the dog’s brows moved up and down significantly. This same reaction did not occur when strangers entered the room.

The look of love

In general, staring directly into another’s eyes is viewed as a threat in the animal kingdom.

However, a study published in the journal Science, found that some dogs exhibit staring behaviors with owners they feel a string attached to.

Don’t feel bad if your dog doesn’t do this though, as generally speaking it isn’t a common behavior in the animal kingdom and there are lots of other things you can look for as signs your dog loves you.

Yawning can be contagious amongst people, and as it turns out, our pets also mimic this phenomenon.

Researchers at the University of Tokyo found that dogs, like humans, yawn reactively.

Dogs are most likely to do this with someone they feel a close emotional bond with.

Once your pooch has finished a meal have a look to see what they do next.

Studies have shown that dogs that go straight to you after eating are displaying obvious signs your dog loves you.

They aren’t motivated by food or treats and are simply showing affection because they enjoy being close to you.

Dogs that wag their tails enthusiastically are exhibiting excitement. When a pup wags their tail around you, they are showing you that they are happy to be around you.

There are, however, certain tail movements that can mean other things. If a dog pumps their tail more to the left, this can mean that they are feeling a little nervous.

But if a dog pumps their tail more to the right, that signifies that they are genuinely happy.

Playing is something that dogs will always do right through into adulthood. Dogs that suffer from age-related health issues, such as arthritis and dementia, are the only exceptions.

If your dog wants to play with you, it’s one of the clear signs your dog loves you.

Dogs don’t like being alone, but you should know that if your dog wants to follow you wherever you go, it isn’t always to avoid being alone.

They are pack animals and it’s natural for them to follow you about to make sure they don’t miss out on any treats of fun to be had!

What does it mean when your dog licks you?

After a long and exhausting exercise, do you often notice that your dog loves to lick you? Is it a sign of affection or you simply taste good for your dog?

We couldn’t know for certain why dogs licks, but here are possible reasons why.

Researchers studying the bigger cousins of domesticated dogs (foxes, wolves, coyotes) reported that mothers would throw up the meat they hunt down for their pups to lick because they’re still too young to hunt by themselves.

This trait is believed to be passed on through genes so sometimes when you see your dog licking; it may be simply out of instinct or they are asking for food.

Did you ever wonder what is the equivalent of kisses in dogs?

Many people believe that licking is like doggy kisses. Often when you come home, your dog will greet you by licking your legs, arms, hands, or even face if they have a chance.

It is their display of happiness that they finally see you again.

Some dogs lick more often than others, but it doesn’t mean that they’re less affectionate.

Another possible explanation of why your dog licks you is because he wants to get your attention.

It is a learned behavior, over time your dog discovered that by licking you, there are more chances of getting massages and praises.

So when your dog licks you, he is sending you a message like, “Hey human, pet me, pet me. Tell me that I’m the best”.

Yes, sometimes your dog licks you because he finds appetizing.

This explains why dogs love licking their owners after exercise – because of the salty taste of sweat.

But sometimes, it doesn’t literally mean that you taste good.

So when they smell something new in our hands, they will put their tongue into it to investigate.

Some of the cleanest dog breeds like Japanese Chin and Shiba Inu tend to lick more because of their cat-like personality.

Licking removes dirt and debris from their body and between their paws.

Licking is a common dog behavior, and while it’s rare, it can also be a symptom that a dog is suffering from Obsessive-Compulsive Disorder (OCD).

It is a chronic disorder meaning it developed after being exposed to sustained stress, anxiety, and fear.

It manifests as excessive licking because licking brings soothing effects on dogs.

Contact your vet if you notice that your dog’s licking is getting out of control.

How do dogs pick their favorite person?

The key to a dog’s heart is quite simple and unmistakably less drama than a human relationship.

It is full of love and compassion, and no betrayal whatsoever.

That is why it is not surprising why many would rather choose dogs over humans.

As one would expect, each dog is still uniquely different. And while truth hurts, being a primary guardian to your dog doesn’t automatically equate as being you as his favorite person.

We don’t want that are we? So here are things you should do to be your dog’s favorite human.

1. Shower them with attention and affection

The first tip is a no-brainer. Same with human interaction, the more time and effort you spent with someone, the more likely they will love you back.

There is no difference when it comes to your dog. Spend a lot of socialization with them, and know what your dog likes best.

This is different than simply supplying their essential needs.

Feeding them with store-bought dog food is also different than cooking their favorite meal.

In other words, if you want to be your dog’s favorite human, you should be willing to take the extra mile.

Having an early bond with your dog is crucial in forming a close bond with them.

According to behaviorists, dogs are in their prime years of learning between birth and six months.

During this time, their brain is very receptive to new exposures, and their social experience will greatly impact their upbringing.

If you miss this time frame, or you may have adopted an older dog, do not worry because dogs learn throughout their life.

Another factor in how dogs pick their favorite human is by having a similar personality.

There’s a saying, “like attracts like,” and it applies to dogs too because dogs will most likely favor someone who has the same interest and energy as them.

This truth also explains why it is important to do thorough research first before getting a dog.

3 Signs you are your dog’s favorite person

So now that we already know how you can be your dog’s favorite person, it’s time to put it on a test.

If your dog does this to you, you might be his favorite person.

Canines do not usually grasp direct eye contact positively. But they do to their favorite human as a display of affection and trust.

Based on a study conducted in Japan, it is found that dogs raise their eyebrows especially the left one for half a second when they see their owner. It is a sign that they’re happy and excited to see you.

According to animal experts, sleeping with a human is the ultimate display of love and confidence in dogs because they feel safe and comfortable when they’re most vulnerable.

Back to Top
Close
3226 shares
We use cookies to ensure that we give you the best experience on our website. If you continue to use this site we will assume that you are happy with it.Ok