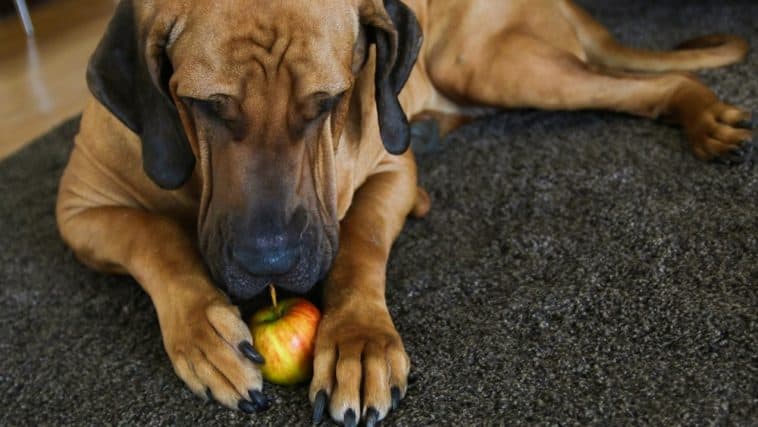 This is a highly contested subject. Some people are adamant that you should never feed your dog apple cores for fear they will become ill, whereas others are more lax about it.

Apple cores are not the most healthy and nutritious food option for your dog. They contain hydrogen cyanide, which can cause damage to your dog’s liver.

The levels contained within a single apple core are relatively low and you should not be overly concerned if you spot your dog munching up an apple core.

What are the dangers of cyanide?

Some people believe that over time, hydrogen cyanide can begin to build up in the liver. These levels can eventually become dangerous and could pose serious health threats.

This is not true. The ingested cyanide is metabolized in the body and converted to 2-amino-2-thiazoline-4-carboxylic acid and thiocyanate. This has a half-life of between 10 and 30 minutes.

Within a few hours of ingestion, all of the cyanide will have been metabolized and will no longer be detectable.

A toxic level of cyanide is 85 grams of apple seeds, and these would all have to be chewed thoroughly before the poison is released. This roughly equates to the seeds of 200 apples. When it is put into context like this, there is very little danger associated with eating a singular apple core.

Provided that the initial dose of cyanide does not exceed the lethal threshold, your dog will likely be fine in a few hours.

What are the health benefits of apple cores?

The health benefits of apple cores are from the remaining apple flesh primarily. The seeds and core themselves do not have a huge nutritional value.

Are there any dangers to feeding your dog apple cores?

The seeds of apples contain a chemical known as amygdalin. When this is chewed and digested it gets converted into hydrogen cyanide. You may have heard of this being used by spies as a covert suicide method if they got caught.

You might be concerned about this, but we’re here to tell you that the cyanide levels are minimal.

If you are aware that your dog has a pre-existing liver condition then there is much more of a reason for concern. If you see them eating an apple core we strongly suggest taking them to a veterinarian for a medical examination.

An impaired liver function will mean that the breakdown and detoxification of cyanide are not as effective and the risks become more severe.

The core of apples tends to be much tougher than the surrounding flesh. This coupled with their oblong shape makes them a perfect choking hazard. It is not worth the risk of feeding your dog an apple core.

If the apple core is not chewed sufficiently then it could cause an obstruction to appear in your dog’s bowel.

How should you feed your dog apple cores?

As you have worked out by now, apple cores are not the best snack to feed your dog. There is very little nutritional value in them and they can pose a choking hazard.

If you do wish to feed your dog an apple core, we advise snapping it in half. This reduces the risk of them choking as they try to eat the core.

What should you do if your dog eats an apple core?

As we have mentioned, unless your dog has liver disease there should not be too much of a cause for concern. You should first evaluate your dog to check for signs of distress and discomfort.

Look for strange bloating, shallow breaths, and labored breathing. Vomiting is another symptom to keep an eye out for.

You should then remove all parts of the core and seeds that your dog has not eaten. This prevents them from consuming any more and becoming ill.

If your dog only ate one core then this should not be too worrying, but the more they eat the more of an issue there is.

It is wise to call your veterinarian if you suspect there may be any potential health issues. They will want to know how much of the core was eaten and if your dog is exhibiting any signs of discomfort or distress.

If just one core was eaten it is likely that your vet will just tell you to monitor them at home. If your dog has underlying health issues or ate a lot of apple cores, your vet will probably want to examine them.

What are the symptoms of canine bowel obstruction?

If your dog experiences a bowel obstruction after eating an apple core the symptoms will present within 72 hours. If you have not noticed anything after this point, your dog is likely in the clear.

Some of the most common symptoms include vomiting, diarrhea, and weakness. They are also likely to lack an appetite and not want to touch their food.

You will likely see their stomachs distending (bloating) and they may hunch over and whine. Your dog will likely be in abdominal pain and will be dehydrated too.

If your dog has a bowel obstruction then they will need a physical examination by a qualified veterinarian.

They will also perform ultrasounds or radiographs to locate the blockage. Sometimes the blockage can be removed with an endoscopy but in severe cases, it might require surgery.

Yes, apples are perfectly safe to feed to your dog. They should not consume apples in excess, as they contain a lot of sugar which can be dangerous to a dog’s health in high quantities.

The crunchy texture of the apple can help your dog to maintain a good level of oral health. As they crunch through the apple, the layers of plaque will be worn off of their teeth.

If you are planning on feeding your dog apples, we advise chopping them up into bite-sized chunks. This will reduce the choking hazard.

Apples are a great source of insoluble fiber which assists with the maintenance of a healthy digestive system.

Back to Top
Close
7 shares
We use cookies to ensure that we give you the best experience on our website. If you continue to use this site we will assume that you are happy with it.Ok