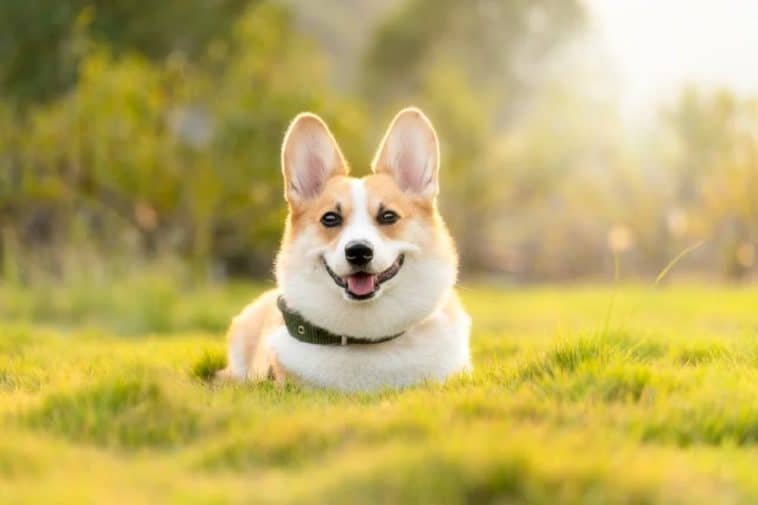 If you scroll through my camera roll, you will find about 1,000 photos of just my dog. My dog sleeping, my dog yawning, my dog nuzzling into my bed, my dog eyeing up my food, you name it. She is just so gosh darn cute, I can’t stop taking pictures of her!

Have you ever looked into your dog’s big, rounded eyes and felt the sudden urge to give them a cuddle, take a pic, or shower them in kisses? You’re probably not alone. One of the main reasons so many people have pet dogs is because they are just so cute and lovable.

But what sparks this urge to cuddle, and respond to those cute, fluffy creatures? Why are dogs sooooo cute? That’s what this guide is here to find out!

What is the definition of cute?

Dogs are so beloved because they are literally the definition of cute. These animals are how we gauge cuteness and sweetness. So, how do we define cute?

The dictionary definition of cuteness is ‘attractive in an endearing way,’ and this makes sense because we are attracted to dogs, in the sense that we are drawn to them, and they are incredibly endearing. But, why are they so endearing to us?

Well, it could be because of the way humans are wired. There is a thing called kinderschema. Kinderschema relates to how most young or baby mammals have the same configuration and appearance; large rounded eyes, small noses, with little mouths and chins.

As humans, we are engineered and designed to find this cute, adorable and lovable as this is how our babies and younglings appear.

Naturally, when we see a baby’s face, we feel compelled to nurture, protect and be gentle with the baby. In responding to those instincts, our bodies release a chemical, dopamine which makes you feel good.

This shows how your brain has evolved to nurture and care for younglings as a survival instinct designed to preserve the human race.

However, this response is not limited to human babies, as we can have this feeling when looking at small mammals, or baby animals such as elephants, lion cubs, and puppies. We feel this involuntary response to love them, care for them and nurture them.

Why are dogs so cute?

Dogs are so cute to us because they have all of the characteristics of kinderschema. They have rounded heads, which are usually large in comparison to their body size. Dogs also have very big, round, forward facing eyes that you can get lost in, along with big, rounded ears that are either pointed or floppy.

In addition to this, dogs tend to have soft, rounded body shapes (that are perfect for cuddling), and floppy limbs with a teetering gait, which makes them seem vulnerable and pettable.

The fact that dogs are covered in soft spots such as the belly, ears, and face, compels us to touch them, pet them and cuddle up with them.

Some scientists have even suggested that dogs have evolved to be cuter, as they have become domesticated, which drives us to want to care for and look after them. It’s because they are cuteness personified!

The science behind why we think dogs are cute

It’s not just because we love them that we want to look after dogs and puppies. There is some science behind it. As humans, we all have an innate sense of what is cute and what is not.

Whether it is learned through social constructs, or through our natural instincts, we already know that a dog is cute, or a baby animal like a tiger is cute, and a snake, shark or a fully grown tiger is not so cute. That’s a given.

So, why do certain animals make us feel inclined to pet, smooth and cuddle them, whilst others do not? Well, it’s all to do with their appearance, and how this creates a natural response in us to protect, love and nurture them.

Some animals, especially baby or small animals have the appearance of being helpless, innocent and youthful, which in turn makes us want to protect them from harm.

Small puppies for example, are often unable to walk, see, hear or do anything but wriggle for the first few days of their lives, making us feel responsible for them due to their helplessness and vulnerability.

Seeing a small, defenceless baby, even if it is an animal and not a human, triggers a warm, nurturing feeling that makes us want to take care of it, cuddle it and go awwwww. Our brains are actually wired to respond to cuteness cues! It’s in our nature to nurture small, helpless animals.

Now, you may be thinking; my dog isn’t helpless, they are an intelligent species. You’re not wrong. Dogs may have evolved and adapted to being cared for by humans, and as a result have adopted some more cute features to help make us want to care for them.

As dogs become more dependent on humans for survival, they may have evolved with more attributes and physical characteristics that make them ‘cute’.

For instance, a recent UK research team found that shelter dogs in particular that raised their inner brow and widened their eyes were adopted much faster than those who did not.

The study concluded that dogs who had learned to use their facial movements had evolved to replicate childlike characteristics, provoking a human instinct and response to care for them and love them.

So, it’s not just you that loves dogs and feels compelled to cuddle, nurture and shower them in kisses. Your brain is responding to natural ‘cute cues’ and telling you that the dog needs caring for, and someone to love it!

Back to Top
Close
2 shares
We use cookies to ensure that we give you the best experience on our website. If you continue to use this site we will assume that you are happy with it.Ok