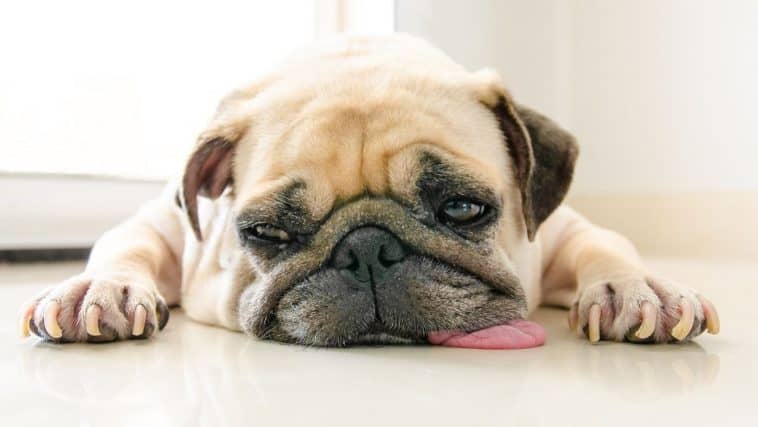 When a human sleeps, they usually sleep with their eyes closed. Is it the same for every creature? What about our furry friends?

You may have seen your dog in the midst of sleep before with their eyes wide open. It can be quite a startling thing to see if you aren’t used to it, but we can assure you that it’s perfectly natural.

Many dogs will sleep with their eyes open, and it can happen for a number of reasons.

So, why do dogs sleep with their eyes open? Here’s everything that you need to know.

Why Do Dogs Sleep With Their Eyes Open?

The short answer is that it ultimately comes down to survival. It dates back to the days when dogs were in the wild. They would keep their eyes open in order to stay alert so that they didn’t get attacked by predators.

It can also help to make predators think that they are alert while they are sleeping.

Of course, dogs aren’t always a target of predators, so a lot of people aren’t really sure why a dog may sleep with its eyes open. It can seem a little bizarre. These are just some potential reasons.

Are Their Eyes Really Open?

The obvious question, then, is ‘are my dog’s eyes really open?’ Well, the truth is that they aren’t really open. If your dog kept their eyes open for long periods of time without blinking, the eyes can begin to dry out.

This can cause dry eye syndrome, which isn’t good for your dog. You’ll likely need to take a trip to the vet in order to get it treated.

Dogs and cats have something akin to a third eyelid, and these help to produce tears and it protects the eyes. This is important, as it helps to protect your dog’s eyes when they are sleeping.

It’s completely normal for your dog to sleep with their eyes open, and it’s also normal for them not to, so you don’t need to be concerned.

Should I Encourage This?

As we have already mentioned, it is normal for your dog to sleep with their eyes open. As such, it’s not necessary to take them to the vet for this reason alone.

In fact, trying to force their eyes shut while they sleep can actually damage your dog or cause them stress, so it’s really best to avoid it.

Naturally, there are times when it can be a problem when your dog is sleeping with their eyes open – we will cover this in the following section. In these circumstances, it’s vital that you get in touch with a vet.

So, when should you be concerned about your dog’s sleeping habits? You usually don’t need to worry about dogs that have their eyes only slightly open while they are sleeping – there may be a little more reason to worry with flat faced breeds, however.

You usually need to worry about open eyes when your dog is narcoleptic or their sleep is otherwise abnormal. You should also worry if they look like they are sleeping with their eyes closed but in reality they aren’t sleeping – they may be having a seizure.

This neurological disorder can mean that your dog suddenly falls asleep in moments where they shouldn’t be falling asleep.

For instance, this may sometimes happen during exercise. It’s a condition that can tend to run in families and certain breeds, such as in Doberman Pinschers, Poodles, Labradors and Dachshunds.

Your dog will flit from being awake and asleep in mere minutes if they are narcoleptic. They will usually collapse suddenly to the ground and stay totally still. Sometimes they may twitch, and their eyes can sometimes be slightly open.

It’s possible for dogs to be epileptic too – not just humans.

Dogs with epilepsy can often have what is known as petit mal seizures – these are sometimes also referred to as absent seizures. During these kinds of seizures, you may notice that your dog is drooling, trembling or simply lying on the floor.

Their eyes may look out of focus and empty. They may look like they are sleeping, but the truth is that they are having a seizure.

Is It Time to Call The Vet?

It’s a good idea to call the vet if:

These can all cause big problems, so it’s better to get help if you have any concerns.

In summary, it’s perfectly normal for your dog to keep their eyes open as they sleep every once in a while.

It’s not a guard dog instinct, but it is a way to deter predators out in the wild. Usually it’s nothing to worry about especially if it only happens every now and again.

Of course, if you do have any reason to be concerned then it’s always a good idea to go to a vet. Your vet can tell you whether it’s a problem that your dog is keeping their eyes open as they sleep, and can help you to find a solution if there’s an issue.

Back to Top
Close
6 shares
We use cookies to ensure that we give you the best experience on our website. If you continue to use this site we will assume that you are happy with it.Ok