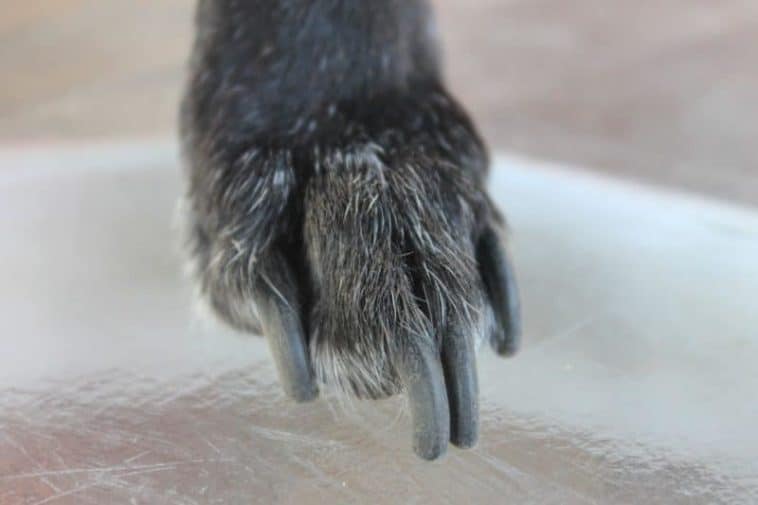 Just like with your own nails, your dog’s nails must be trimmed and cut regularly lest they become overgrown.

For pet owners, dog nails that are overgrown can become unsightly and can make playtime a bit of a challenge because of the possibility of you getting scratched by your dog.

But if you haven’t trimmed your dog’s nails in a while, don’t feel too bad about it.

You’re not the first one to do it. If you don’t know how to trim dog nails that have overgrown, then you’re just in the right place to know-how.

Your dog will feel much better without the discomfort of having overgrown nails.

This is because a dog’s nail will only continue to grow and the added lead can lead to pain.

Overgrown nails in a dog will eventually sag causing hurt to their paws.

Just like in the case with people, overgrown dog nails are like an ingrown that can cause pain and infection – two things that you definitely want to avoid with your dogs.

Another reason why you have to trim your dog’s nails is that an overgrown nail can get caught on textiles like a carpet around your house.

Honestly, dogs and puppies alike are not a fan of nail trimming.

The only way your dogs or puppies will like it when you trim their nails is when you make the experience a positive one for them.

Most of the time, your canine friends will dislike having their overgrown nails trimmed because it caused them pain in the process.

The good news is that if you keep your dog’s nails trimmed, then you don’t have to do it as often as you would a human nail.

A regular walk on the pavement is also a natural ways to keep your dog’s nails short and trimmed.

How to trim dog nails that are overgrown

The process of trimming overgrown dog nails can become a challenge for most pet owners.

Just like any other routine, though, you can train your dogs to tolerate the process of nail trimming and do everything you can to make the experience pleasant and not overly painful for them as it sometimes cannot be avoided.

Here are the two important things you need to do first before you go to the actual process of trimming overgrown dog nails step-by-step:

Make sure that you choose and use the right trimming materials

Dog nails are different than humans so a regular nail cutter won’t cut it for your furry buddy.

Dogs have thicker nails with a cylindrical shape so make sure that you use nail clippers specifically made for dogs.

There are a variety of options to choose from like the guillotine utensil which is best for beginners, the scissor-type nail clipper fit for short dog claws, and the clamp type nail clipper often used by vets and pet grooming professionals because of its ease of use and durability to stay sharp for a long time.

As soon as you bring your pup home, make sure to immediately introduce them to nail trimming so that they’ll get used to it as they grow.

A dog that has grown with the feeling of having its paws touched while young is more likely to feel comfortable having their nails trimmed.

You can also play with your puppy’s or dog’s paws first so they would associate nail trimming as play and be eager for it.

You can also give them a treat if they respond well to nail trimming to make this same routine easier to do in the future.

Step by step process on how to cut overgrown dog nails

Step 1. Carefully position your dog or puppy for the nail trimming. Make sure that your dog won’t bite you or twist suddenly while you’re doing the trimming.

It’s advisable to have somebody else with you, especially if you have a large dog, to pet it or talk to your dog. For a much smaller dog, you can do it alone by holding its body with one hand and its paw on the other hand.

Step 2. Make sure you place the nail clippers properly on your dog’s nails at a 45-degree angle.

Cut your dog’s nails until you see the thin pink fiber which is easier to see on dogs with lighter nails.

For dogs with dark-colored nails, do the cutting little by little until you see the pink fiber.

Don’t cut beyond this part because doing so would cause pain and bleed for your dog.

Step 3. Don’t rush trimming your dog’s overgrown nails to avoid accidents. Rushing can also make your dog agitated or scared during the process.

For every nail that you clip successfully and your dog behaves nicely, reward them with a treat so they’d treat the nail trimming as a game.

Step 5. Just repeat the process until you get to trim all of your dog’s overgrown nails.

In case of bleeding because you miscalculated the length of dog nail you should cut, apply pressure on the bleeding nail, put styptic powder, and a bandage to your dog’s paw.

Once the bleeding stops, carefully remove the bandage. If the bleeding becomes too heavy, go and see your vet right away.

How often should you cut overgrown dog nails?

Every time! In fact, you shouldn’t wait for your dog’s nails to be overgrown before you trim them.

Some dog’s nails grow faster than other dogs and some don’t need much trimming at all because they have a faster rate of natural wear due to constantly walking on pavement.

Trimming your dog’s nails once a month or every two months is the general practice among most dogs.

Of course, you can also do a visual check to see if your dog’s nails need trimming since the nails on the forepaws of your dog grow faster than its hind paws.

Trimming your dog’s overgrown nails can really become a challenge for both pet owners and your canine buddy.

But once you trained your puppy or dog to the process and make this routine a relaxing and playful time for them, then trimming overgrown dog nails wouldn’t have to be as stressful.

Back to Top
Close
130shares
We use cookies to ensure that we give you the best experience on our website. If you continue to use this site we will assume that you are happy with it.Ok