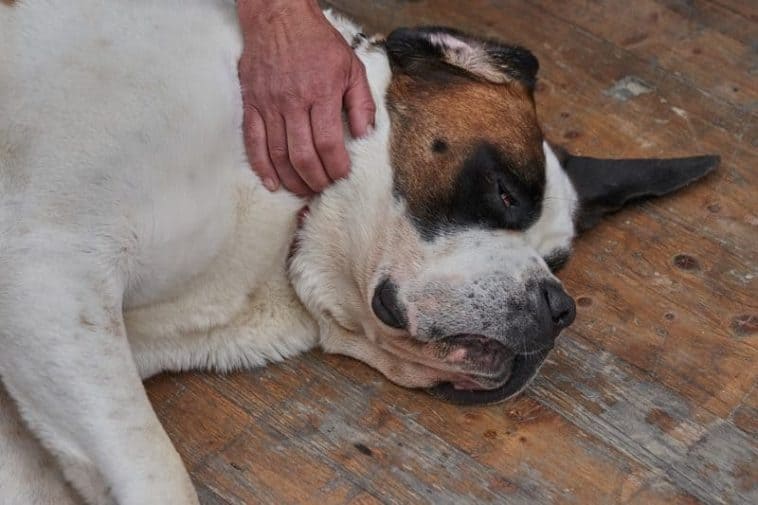 Recent research has revealed that strokes in dogs is much more common than previously thought.

As veterinary medicine advances, and specialized tests become more widely available; we are better able to diagnose symptoms and understand the causes of strokes in animals.

Although the idea of your dog suffering a stroke may be alarming, strokes in dogs are often not as debilitating as they are for humans.

With proper veterinary attention and appropriate care at home, your beloved pet may recover well.

What is a dog stroke?

A stroke is known in medical terms as a ‘cerebrovascular accident’ and is caused by a reduced supply of blood reaching the brain.

There are two types of stroke:

What are the causes of strokes in dogs?

The brain of a dog, or a human, relies heavily on a constant supply of oxygen rich blood to operate.

Hemorrhage strokes can see entire areas of the brain destroyed when the blood supply to the region is cut off by a burst blood vessel.

It is widely accepted that ischemic strokes are often the result of underlying diseases such as; kidney disease, heart disease, under or over-active thyroid glands, Cushing’s disease, diabetes and high blood pressure.

Hemorrhagic strokes are usually seen in digs that have diseases that interfere with blood clotting.

Signs of stroke in dogs: How do I know if my dog has had a stroke?

The signs of strokes in dogs are often very different from those seen in humans.

In a human stroke; it is common for people to suffer from paralysis on one side of their face or body, but these are rarely associated with strokes in dogs. More common signs include:

However, these signs are not exclusive symptoms of strokes and can be associated with other brain diseases, such as tumors.

Another similar condition to a stroke that commonly strikes dogs is a vestibular disease.

Vestibular disease usually affects older dogs, but younger dogs have been known to suffer from it too.

It affects the inner ear and is responsible for the characteristic stroke-like symptom; loss of balance.

Other symptoms of vestibular disease are:

How can I diagnose my dog for possible stroke?

Your vet may suspect that your pet has suffered a stroke from the signs your pet is showing.

In order to make a definite diagnosis, your vet will need to do some further tests including imaging your pet’s brain.

It is not possible to make this diagnosis using standard X-rays, so a vet will need to take a picture of the inside of the brain using a specialist scan such as a CT scan (computed tomotgraphy), or an MRI (magnetic resonance imaging).

These tests require your pet to be put under anesthetic, so that they can keep still during the examination.

Your vet is likely to take this opportunity to withdraw a sample of spinal fluid, through a spinal tap procedure.

This fluid is then used to check for other potential diseases that could cause similar symptoms.

Diagnosis of strokes in dogs are based on the identifying changes in the brain, and by ruling out other diseases that could mimic a stroke.

Despite thorough investigations, an underlying cause is not found in more than half of dogs with strokes.

Will my dog make a full recovery after a stroke?

Once a stroke has occurred there is no specific treatment that can repair the damage done to the brain.

Efforts should be concentrated on identifying a potential cause for the stroke and, if a cause is found, treating it to prevent further strokes.

Although there is no specific treatment for strokes in dogs, most pets tend to recover within just a few weeks.

However, a complete and full recovery may not be possible if the stroke has affected a vital part of the brain.

The long-term outlook and chances of another stroke depend on what has caused the stroke in the first place and whether this can be successfully treated.

What Do You Do When A Dog Has A Stroke?

If your dog is having a stroke, the best thing you can do to help is stay with them until it’s over. This may take as long as a couple of hours, but it’s important to keep your dog safe and reassured while they’re going through the stressful ordeal.

Often, dog owners aren’t present when the actual stroke occurs, but if you notice a loss of balance, rapid eye movement, or vomiting, this may indicate that your dog is suffering from the condition. Try to stay close to them and provide comfort until the symptoms have stopped.

Some of the best methods of relaxing your dog include talking in hushed tones, petting them softly, and remaining as calm as possible. Even though the situation will be upsetting and frightening for you, try not to display this emotion to your dog.

It’s not uncommon for dogs to develop an unquenchable thirst after a stroke. Provide them with water, but only allow them to drink a few gulps at a time before removing it. If left to their own devices, they may not stop drinking and could take on excessive, unhealthy amounts of fluid.

Finally, make sure you keep their head elevated to ease any excess pressure. Preventing any additional pressure is essential given the fact that strokes are typically caused by excess pressure between the brain and skull bone.

If they’re lying down, try to elevate their head so the blood flows away from the brain. If, however, they’re sitting upright or walking around, do your best to try and gently move their head upwards to relieve pressure and hopefully make them feel a little better.

Needless to say, it’s imperative that you take your dog immediately to a vet if they’ve had a stroke. The sooner they can be seen and evaluated, the better, as professional care will increase the chances of your pooch making a full, healthy recovery.

Can Dogs Have Mini Strokes?

A “mini stroke” is also known as a transient ischaemic attack (TIA), and can affect dogs as well as humans. These types of stroke are caused by a temporary disruption in the blood supply to a dog’s brain. This disruption subsequently results in a lack of oxygen being transported to the brain which can be extremely serious.

Can A Dog Recover From A Stroke?

As mentioned earlier, for the best chance of recovery, it’s essential to take your dog to the vet immediately. In most cases, your furry friend will need to remain hospitalized for at least a few days so the vet can closely monitor their health at regular intervals.

Although there’s no specific treatment for strokes in dogs, you can still play your part as their owner in helping them recover. Make sure you provide your dog with a comfortable resting place, administer medications (typically either sedatives, anti-nausea medication, or anti-inflammatories) as instructed, and try to determine the cause of the stroke.

It’s important to work with your vet to understand the root cause of the stroke as this can help to develop an effective treatment plan to aid recovery. For example, if your dog suffered a stroke as a result of high blood pressure, they could be prescribed medication which would help to reduce their blood pressure.

However, for some dogs, complete and full recovery may not be possible if the stroke has affected an essential part of the brain.

How Long Does A Stroke Last In A Dog?

In general, dogs that experience a good level of improvement and recovery in the first 3-5 days are expected to overcome the effects of a stroke within 4-6 weeks. It’s worth noting, some may have residual deficits, but their quality of life will still be good.

What Causes Sudden Neurological Issues In A Dog?

There are a number of predisposing conditions that your dog may have that can cause neurological issues such as a stroke. Listed below are some of the most common, so if you have any concerns, be sure to take your pooch for a check-up.

What To Feed A Dog That Had A Stroke?

A change in diet can aid your dog’s recovery after a stroke. Try to increase their antioxidant intake as natural antioxidants like vitamin C, vitamin E, and citric acid can all help to prevent the negative effects of oxidation.

Feeding your pooch a diet high in omega fatty acids is also important. Omega 3 fatty acids are believed to significantly help your dog’s recovery because they’re concentrated in the brain where they can create various connections between the different parts.

Furthermore, they also reduce inflammation and increase oxygen flow, which is vital for the healthy and efficient functioning of each part of the body.

You can either look for specific store-bought foods that include Omega 3s such as mackerel and salmon, or give your dog Omega 3 supplements. Just be sure to double check with your vet beforehand.

Back to Top
Close
943 shares