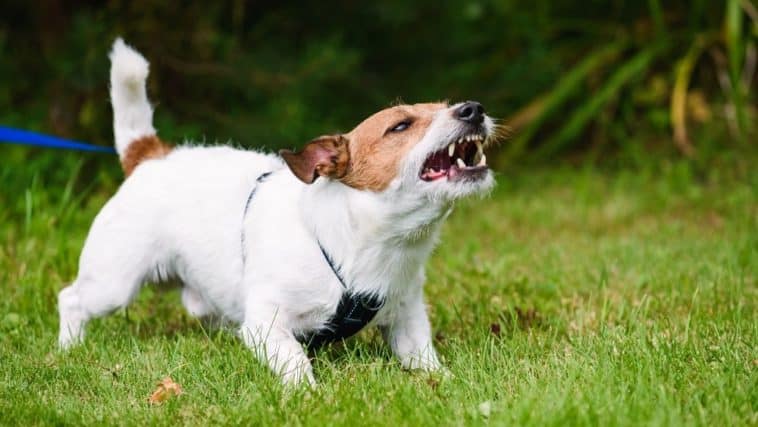 All dogs bark, it’s their natural response to lots of situations. Barking is how dogs are able to vocally communicate with other dogs and their humans.

While it’s totally normal for dogs to bark, it’s not always obvious why they are barking, and some dogs can be incessant barkers which can be a nuisance for you and your neighbors.

If your dog barks a lot, even when they’re alone, it may seem like they are barking at nothing but, generally, when a dog barks, there is some sort of reasoning behind it.

So, the best way to deal with dogs that bark a lot, is try to understand why they might be barking.

This article will explain some of the reasons why dogs bark and how to deal with it. Keep reading to find out.

Why do dogs bark?

Identifying why your dog is barking a lot is super important because they may be trying to tell you something is wrong. Below are the most common reasons why your dog may be barking.

If another animal or a person comes into the area that your dog considers is their territory, they will often bark as a warning to that animal or person.

For example, most dogs tend to bark excessively when someone knocks on your doors or walks past the window.

Your dog will identify the person or animal as a threat and bark excessively at them, often increasing in volume until, either the threat goes away or they are satisfied that they aren’t a threat.

When your dog barks at other dogs and humans but is wagging their tail and jumping/ engaging in play-like movements, they are not barking in a protective or territorial manner here, they are just greeting the other dog or human.

The barking should settle down once the excitement fades.

You will find that when your dog wants something, they will bark either at you or the object/ area they want.

For example, if your dog wants to be let outside to go to the bathroom, they will bark at the door until you let them out.

Dogs also tend to bark at you if they want you to play with them, and you’re ignoring them or when they want to be fed, they will either bark at you or at the food bowl/ cupboard.

Dogs naturally prefer to be with other animals as they are pack animals. So, the majority of dogs will find being left alone for long periods or even short periods in some dogs, quite stressful and lonely.

They will bark because they are sad or bored, likely to communicate that they want their owner’s attention.

Much like humans, when a dog is startled or alarmed by something or someone, they will vocalize this fear as a natural response.

You’ll probably notice that their ears are pricked back, and their eyes are alert. Their tail will likely be ticked down between their legs too if they’re very startled.

If your dog is in pain or not feeling right, they tend to bark more often than normal. You may notice your dog is barking, yelping and/ or growling a lot as a way of communicating to you that something is not right.

Often, dogs bark excessively when left out in the yard or in a room on their own because they are suffering from separation anxiety.

Dogs also bark from boredom when left alone so to tell the difference between boredom barking and separation anxiety barking, if your dog has separation anxiety they will show other signs such as pacing around the room or yard and destructiveness.

How to deal with excessive barking

To stop your dog from barking, you need to remove what is triggering them. Simply shouting at them until they stop won’t work, and it is not a long term solution.

If your dog is excessively barking, and it doesn’t seem to be due to the more obvious reasons, they may be trying to tell you something is wrong. So, the best thing to do to deal with this is to take them to the vet to see if there is a medical explanation for your dog’s unrest.

If your dog seems to be barking a lot from boredom, the best thing you can do to curb this is to ensure they are getting the right amount of exercise and mental stimulation that they need every day.

Your dog may find it distressing being left alone for long periods of time, so you should try to keep leaving them alone to a minimum as much as possible.

If you can’t help having to leave them every day, maybe you should consider taking them to a doggy daycare or to a family or friends house during the day so that they’re not lonely.

Teaching your dog the ‘speak’ and ‘quiet’ commands is a good way to teach them when barking is good and when it isn’t allowed.

If you’re struggling with bad behavior, you will have to work hard on training and boundaries. If you are really struggling to deal with your dog’s behavioral issues you may need to take them to training and/ or behavioral school.

What not to do if your dog is an excessive barker

When your dog won’t start barking, it can be easy to lose your patience with them, but as annoying as it can be, you should never hit or yell at your dog as a way to stop them from doing anything.

Positive reinforcement always has better, long term results! Some people may recommend that you try using an anti-bark collar which is basically a shock collar that shocks your dog every time they bark.

This method can be easily misused and can create a lot of fear, anxiety and even aggression in your dog towards you and other dogs.

Back to Top
Close
21 shares