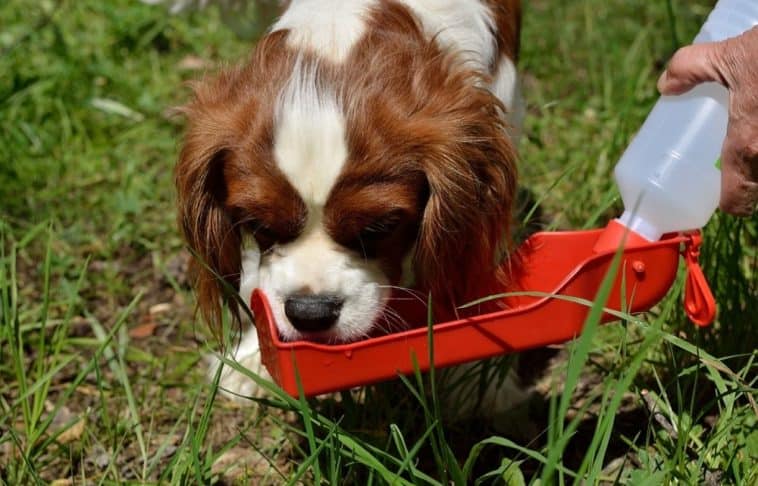 Keeping yourself well hydrated is a pretty important part of life. And when it comes to hydration, there’s nothing better than water.

However, if you exercise or are out in the heat, sweating, and dying of thirst, then sports drinks such as Gatorade are the absolute best for quickly replenishing all of those essential minerals. (Plus, you know, it tastes good.)

Gatorade is also good for when you’ve been vomiting or having diarrhea, as it very quickly replenishes you with those essential fluids, and can help make you feel better.

But…what about dogs? Let’s say you’re out exercising with your furry companion, can you give your dog some Gatorade? Or is it dangerous?

The answer is yes, but in moderation. Dogs are completely fine to drink a few drops of Gatorade, and it shouldn’t do them any harm whatsoever.

However, dogs should primarily drink water, and water will be the best liquid to keep your dog hydrated and healthy. Gatorade is not a valid substitute, and giving your dog large quantities of the sports drink can actually lead to some complications.

The main thing to watch out for in Gatorade is the large amounts of sugar and sodium that it contains. These can be great for quickly replenishing essential fluids and minerals, and to us, it’s completely fine because our stomach can handle those quantities of sugar and sodium.

However, dogs can’t process additives the same way we do, and as they are smaller, their stomachs can’t handle the same amounts of sugar and sodium as us.

So basically, a small amount of Gatorade every once in a while will be completely fine for your dog. But it’s very important to not give them too much Gatorade, or give it to them too often, or else you will be putting too much stress on their kidneys to process all of the additives included within the drink.

When should you give your dog Gatorade?

Okay, so Gatorade is fine for dogs as long as it’s a little and not often. But are there any specific scenarios or situations in which giving Gatorade to your dog is good? Or in other words, when should you give your dog Gatorade?

There are cases in which Gatorade can be really useful, and can be a faster-acting solution than normal water. If your dog is severely dehydrated or has been suffering from vomiting and diarrhea, then a few drops of Gatorade can be very helpful.

This will quickly replenish the essential fluids, and will quickly hydrate your dog. A few drops can also help them feel better after so much vomiting and diarrhea, especially thanks to the taste, which will make them feel like they’re being treated and being taken care of.

However, once again, you need to remember not to give your dog too much Gatorade, or else it will go from being helpful to causing possible kidney complications.

How to give your dog Gatorade:

If you’re going to give your dog Gatorade, then the best way to go about it so that it doesn’t end up being too much of a quantity is to dilute it. The best way is to do a 50:50 ratio of Gatorade and water.

So have half a bottle of Gatorade, and then fill up the remaining half with water, so that it’s half and half. This way, your dog will get plenty of the nutrients and minerals from the Gatorade to reap the benefits, but the additives will not be as concentrated so it won’t be as stressful on the kidneys.

This is especially useful when your dog has been vomiting or has had diarrhea.

If you want to give your dog Gatorade during the summer months, as a boost to keeping up the hydration in the hot weather, then there’s a more fun way to go about it. You can freeze some Gatorade into small ice cubes.

This will not only ensure that the Gatorade is divided into small amounts, but it will also be extra refreshing and enjoyable for your dog, especially as a way to fight the heat. Plus, it will essentially be a fun treat!

If Gatorade is given in small quantities, on an occasional basis, then it is completely safe for dogs and will not cause them to be sick. In fact, it can actually be quite beneficial to help with hydration levels and essential minerals, especially in dogs that are old, weak, dehydrated, or that are suffering from diarrhea and vomiting.

However, if too much Gatorade is given at once, and on a very frequent basis, then it can cause some complications. Gatorade has high concentrated levels of sugar and sodium, which can’t be as easily processed by the dog’s kidney.

So if your dog drinks Gatorade on a regular basis, and in big amounts, then this will be putting a lot of stress on their kidney. This can therefore lead to kidney complications, such as a kidney infection, kidney stones, and more.

So as long as you’re only giving Gatorade to your dog in small amounts, and not on a regular basis, then it should be fine. Remember, Gatorade can be a good booster, but it cannot replace water as the main liquid for dogs and other animals.

Back to Top
Close
8 shares
We use cookies to ensure that we give you the best experience on our website. If you continue to use this site we will assume that you are happy with it.Ok