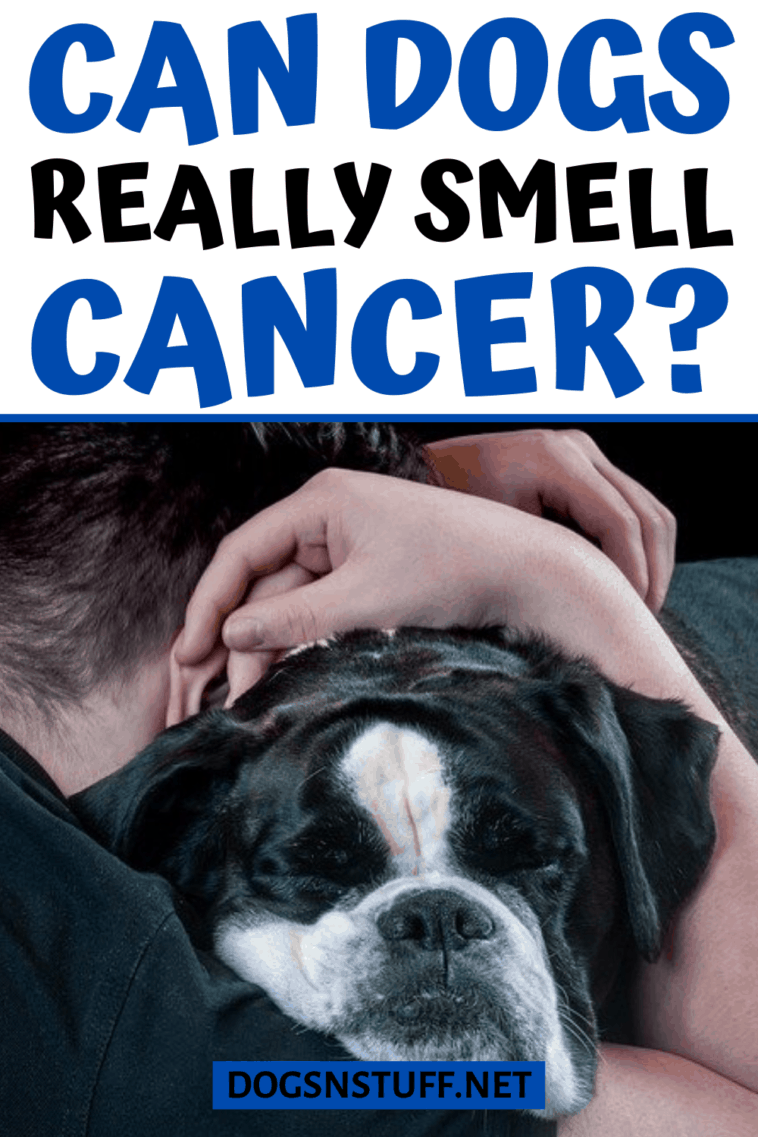 Domesticated dogs have been with humans for over 32,000 years.

They have proven their loyalty and helpfulness in a variety of ways such as protecting our homes, law enforcement, search and rescue, and now even cancer detection.

Yes, you’ve read it right; dogs can sniff out if their owners have cancer.

This means that dogs are 10,000 times better at detecting even the smallest odors and scents such as the release of hormones in the body.

As a result of dogs’ remarkable sense of smell, it leads scientists to wonder, can dogs smell cancer?

Read: 8 Surprising Benefits of Having a Dog in Your Life!

How do dogs act when they smell cancer?

The earliest mention of canine cancer detection can be traced back in 1989 from a British medical journal, The Lancet.

In this said publication, two dermatologists reported that the dog is constantly sniffing a lesion on its owner’s leg every time she is wearing shorts.

Unsettled, the woman visited a doctor to have the lesion checked. And it turns out to be a malignant melanoma.

Another way how dogs act when they smell cancer is persistent licking.

This is supported by a case study from BMJ Case Reports. A concerned 75-year-old man went to his doctor after his dog persistently licks a colored lesion behind his ear.

Later on, the doctor also identified it as malignant melanoma.

Dogs detect scents on parts per trillion level, they can recognize the slightest concentration of aromatic and alkane compounds which are produced by metastatic tumors in the person’s blood, breath, feces, skin, sweat, and urine.

They can also detect different types of cancer such as:

There are dozens of testimonials circulating online about untrained dogs that can detect cancer.

However, it is not proven whether those are indeed true. On the contrary, a UK nonprofit foundation founded by Dr. Claire Guest in 2008 specifically train dogs to detect diseases, including cancer.

Dr. Guest herself can attest to this when her Labrador named Daisy was able to detect a deep tumor growth in her breast that at that time was still impalpable.

According to her, if it’s not for her dog, her treatment would be delayed and her prognosis would not be good.

Whether cancer-sniffing dogs will be the future of non-invasive cancer screening tests remains unclear.

There have been several pieces of research that seem promising, but are still insufficient to be accepted in the medical practice.

In the meantime, you can observe your dogs’ behavior and see if it is bringing something to your attention.

Does your dog keep staring or sniffing a specific lesion or lump in your body? Your dog might be giving you a sign to visit a doctor. Remember when it comes to cancer, the earlier it is diagnosed, the higher the chances of recovery.

Back to Top
Close
505 shares