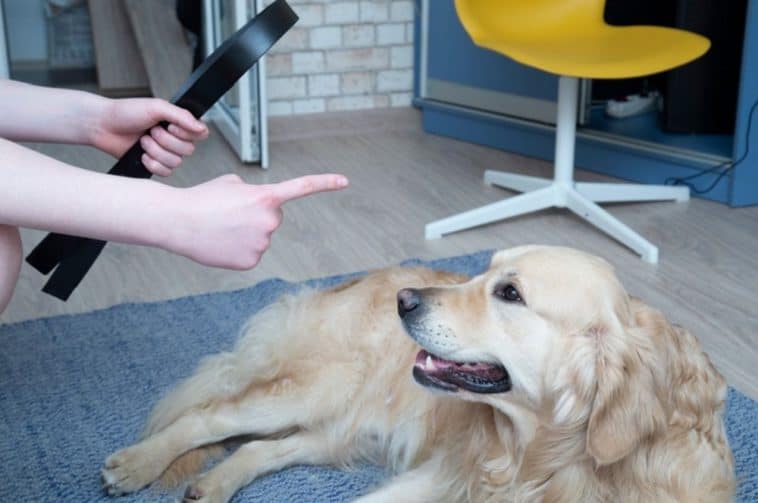 Your dog may look guilty when you come home from a long day at work and you find they’ve had the trash out across the whole kitchen. But do dogs actually feel guilt?

Even though your dog may be displaying body language that makes them look guilty, such as cowering, tucked tail, flattened ears, and avoiding eye contact, chances are they don’t actually feel guilty about whatever it is you’re telling them off for.

These are all fear responses, and they’re likely anticipating a telling off from your body language or behavior.

They may appear to look guilty, but vets suggest this is more of a case of anthropomorphism, where we as humans attribute human behavior or characteristics to an animal.

So if your dog looks guilty when they’ve done something wrong, chances are they’re just anticipating being told off like they were last time. They start to cower before you as a way of asking for forgiveness, even if they don’t know what they’ve done wrong.

It’s important to remember that guilt is a more complex concept than being happy or angry. So it’s a fairly difficult concept to prove whether dogs feel guilty or not. Ultimately, we as humans tend to imagine we see these complex concepts in our dogs, when chances are they don’t feel guilt at all.

Do dogs know they did something wrong?

Similar to knowing whether a dog can feel guilt, it’s tricky to prove whether your dog knows if they’ve done something wrong. However, it’s important to remember that your dog’s memory doesn’t work the same way that ours does.

Dogs use a different type of memory than humans. They tend to live in the moment, and only have a very short term memory. So when they’ve made a mess of your house, or accidentally done their business inside, they won’t actually remember doing this. Dogs can typically remember what happened roughly 10 to 20 seconds previously.

So there’s no point in scolding your dog when you get home for peeing indoors, as they won’t remember doing it.

Even if your dog looks guilty when you tell them off, this isn’t an admission that they knew they did something wrong. Chances are they’re only appearing submissive to you because they have no idea what they did wrong, and just want to appease you.

Do dogs feel guilt after biting?

So we’ve already established that chances are your dog won’t remember if they’ve done something wrong. They are also very unlikely to feel guilt, as it’s a difficult hypothesis to prove. But what about if your dog bites you? Can they feel guilt about this?

It’s important to remember that dogs display their emotions through their body language. Dogs are very unlikely to bite their owners, unless their other signals have been ignored.

If a dog is asking you for space, it will start to growl and bare its teeth. If these signals are ignored, your dog will ramp up their behavior until you listen to them. This could lead to a nip or eventual biting until you leave them be.

Your dog may appear affectionate towards you afterward, but remember that their memory and behavior doesn’t work the same as humans. It will be important to note what happens before your dog nips at you so you can work out what the issue is.

How do I know if my dog feels guilty?

It’s difficult to know whether your dog feels guilty or not. They likely won’t remember whatever it is you’re telling them off for. They’re also not able to convey emotions in the same way that we humans do.

Your dog may appear to be feeling guilty. They may cower before you, flatten their ears against their head, tuck their tail in between their legs. But as we’ve mentioned above, these are all signs of fear, too.

If you’ve told your dog off for something before, they will remember how this made them feel. So they display signs of appeasement to make you happy, and appear submissive to you as their owner.

Is it true that dogs don’t feel guilt?

It’s fairly safe to assume that this is incredibly unlikely. Much of the same behaviors that we take to represent guilt are actually signs of appeasement. However, there’s no real way to understand what exactly your dog is feeling.

It’s worth noting that if you’re sad, your dog knows this, and it can distress them. They will even try to cheer you up by licking your face. We can also tell when they’re happy to see you or spend time with you. So even though we can’t be sure if dogs feel guilt, we do know that they feel emotions.

So there you have it! Even though it may appear as if your dog is feeling guilty, the body language they use are also signs of fear. If you’ve told your dog off before, they are likely to remember how this made them feel. They show you their signs of appeasement to make you happy and to show you they are submissive to you.

It’s also important to remember that dogs only have a short term memory. They can typically only remember what happened between 10 to 20 seconds ago, so they won’t remember if they’ve done something wrong.

This also means there’s no point in having a go at them when you get home after a long day, because your dog won’t have a clue why you’re telling them off.

Back to Top
Close
17 shares
We use cookies to ensure that we give you the best experience on our website. If you continue to use this site we will assume that you are happy with it.Ok