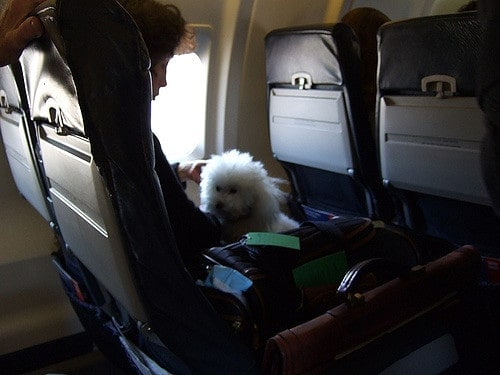 Due to the careless actions of a trained airline attendant, an adorable ten-month-old puppy died during a United Airlines flight from Houston to New York in the United States of America.

As terrible as this tragedy is, it has been made all the worse by the disgraceful actions of the attending air host, whose insistence on putting the small pooch into an overhead locker at the beginning of the flight, resulted in its untimely death.

Dog on plane shouldn’t be locked up on an overhead bin!

Although the passenger had previously been assured that she could safely travel with her pet, upon boarding a flight attendant told the passenger that she must put her dog in the overhead BIN before take-off.

The passenger refused but was threatened with removal from the craft unless she complied.

She tried to insist that she would leave her beloved pooch in her handbag under the seat in front of her but was repeatedly threatened with removal from the aircraft.

After some time, the woman reluctantly relented and placed the dog in the bin as instructed by the flight attendant.

The terrified dog was reportedly heard barking on takeoff and during some turbulence, before eventually falling silent.

Upon landing at LaGuardia airport in New York, passengers of the flight reported seeing the heartbroken owner of the puppy cradling the creature in her arms and crying profusely whilst sitting in the aisle of the aircraft after it touched down.

A fellow passenger, Maggie Gremminger, posted on Facebook: “At the end of the flight, the woman found her dog, deceased. She sat in the airplane aisle crying, and all of the surrounding passengers were utterly stunned.”

Gremminger then posted a photo of the grieving passenger and wrote: “I want to help this woman and her daughter. They lost their dog because of a United flight attendant. My heart is broken.”

Another passenger who was sitting behind the family and witnessed the incident, June Lara, also posted about the disturbing flight on Facebook.

According to Lara, the flight attendant “INSISTED that the puppy be locked up for three hours without any kind of airflow.

The puppy barked throughout the flight, filling our flight with his cries until he finally ran out of breath.” Lara also posted photos of the dog, in which the 10-month-old puppy is shown laying lifeless in a dog carrier.

According to United’s website, the airline allows domesticated cats, dogs, rabbits, and birds, and “A pet traveling in a cabin must be carried in an approved hard-sided or soft-sided kennel. The kennel must fit completely under the seat in front of the customer and remain there at all times.”

The website does not state anywhere that dogs are to be placed in overhead bins in any kind of situation or circumstance.

The incident has caused global outrage, with many people announcing that they will be boycotting United and no longer flying with an airline that shows such callousness to animals.

A spokesperson for the airline released this statement: “United Airlines have accepted full responsibility for the tragedy and have launched an internal investigation as to why the flight attendant insisted that a loved and living creature was forced into the overhead bins.

Lessons learned from this dog on plane incident

This was a tragic accident that should never have occurred, as pets should never be placed in the overhead bin.

We assume full responsibility for this tragedy and express our deepest condolences to the family and are committed to supporting them.

We are thoroughly investigating what occurred to prevent this from ever happening again.”

If you are as shocked and horrified as we are that an animal was forced to endure this tragedy, then please SHARE this story to make sure this terrible situation never happens again!

Back to Top
Close
121 shares