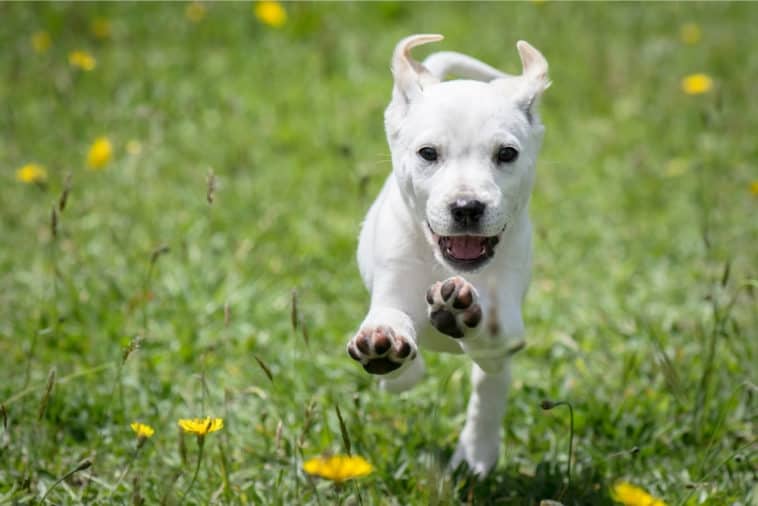 Dogs can make great running partners, however, the speed at which they travel will depend on several factors, this includes the breed, age, body composition, and health.

Below, we have provided you with a guide that covers all that you need to know about how fast dogs run.

Generally, an average, untrained dog that is in optimal health can run at around 15 to 20 mph.

However, this is simply an average because as we have mentioned, several variables will influence the speed that your dog will run. Whilst some dogs will run at a much slower pace, others will run significantly faster.

How do dogs run?

Understanding a dog’s anatomy will make it easier to see how they run so fast. When discussing dogs and speed, you will often stumble across the term ‘’gait’’. This is a term used to describe a dog’s quality of movement and how their limbs move whilst they are moving.

There are several different gaits to be aware of, this includes walking, amble, pace, trot, canter, gallop; single and double suspension. A double suspension gallop is essentially a dog’s overdrive mode because this is when it will be running at its maximum speed.

The limbs of most dogs follow a four-time asymmetrical gait which means that their right and left front feet will move at once, followed by their right hind and left hind.

A dog’s anatomy is also made up of a flexible spine and strong muscles and this is what allows them to run with more power.

Why do dogs run so fast?

There are several reasons why dogs run fast. Of course, the fact that they have four legs rather than two gives them a major advantage in comparison to humans.

Four legs don’t necessarily equate to more steps but as the front and rear legs work closely together they are going to be faster.

The structure of a dog’s paws helps them to accelerate to a greater speed as they run. The padding along with their nails allows them to maintain a firm grip on the ground providing great traction regardless of the surface.

These pads are also there to protect your dog’s paws. When the temperatures drop, they will keep them insulated.

For example, a greyhound is extremely fast, and its ability to run at such impressive speeds is largely down to the aerodynamic elements of its body.

Now you may be wondering how you can identify a dog that has an aerodynamic body. Typically, they have small heads, slim bodies, and long but muscular legs.

The shoulders of dogs aren’t connected to a collar bone like humans, instead, they are connected by a series of very strong muscles which are known as their shoulder girdle muscles. This means that dogs can execute longer strides with greater ease.

A dog’s tail can also help them run faster. Essentially, it improves their center of gravity and acts as a weight that balances them when they need to turn and change direction. By helping them to remain in control, the risk of them stumbling as they make these movements is reduced.

The respiratory and cardiovascular systems of dogs will influence how fast they can run. Greyhounds in particular benefit from increased blood circulation and this will ultimately result in improved running speeds.

Other breeds are equipped with larger lungs which allow them to inhale more oxygen which is going to help with their breathing in return.

What are the fastest dog breeds?

Certain breeds are renowned for their fast running speed. It is important to remember that the speed can vary depending on the individual dog and the following isn’t reflective of the entire breed.

As mentioned throughout our guide, greyhounds are identified as one of the fastest runners. Impressively, they can reach a maximum speed of 45 mph in very few strides. The shape of their bodies; long legs, flexible strides, and muscles means that they can run with more power in each stride.

Many would suggest that a Saluki is as fast as the wind. Whilst greyhounds are the fastest breed, it is believed that a Saluki can cover a longer distance at a greater speed. An ancient breed, Saluki were originally bred for chasing rabbits and can reach a top speed of 42 mph.

Afghan Hounds are also a very fast breed. Again, as they were once hunting dogs, they have been bred to run, hence why they are so good at it.

Their long-haired coats can sometimes hold them back when they are trying to run at great speeds, despite this, they can still hit a top speed of 40 mph.

The fourth-fastest breed is the Vizsla. They come from Hungary and were originally trained to run with hunters.

Due to their high energy levels, they are a great choice for active families who enjoy being on the go. Just like the Afghan Hound, a Vizsla can reach a maximum speed of 40 mph.

Why are some dogs slower than others?

Because of this, they will struggle to run at a fast pace because their breathing will not be able to keep up.

Other dogs have a large body mass. As such, you will typically find that they travel at a slower speed.

Along with pugs, bulldogs, Chihuahua’s, Basset Hounds, Shih Tzu’s, and St Bernard’s are some of the slowest dog breeds.

As you can see, some of the fastest breeds can reach up to 45 mph and this is largely thanks to their muscular build and powerful respiratory and cardiovascular systems. There are certain breeds that are a lot slower and will struggle to reach faster speeds.

Back to Top
Close
4 shares