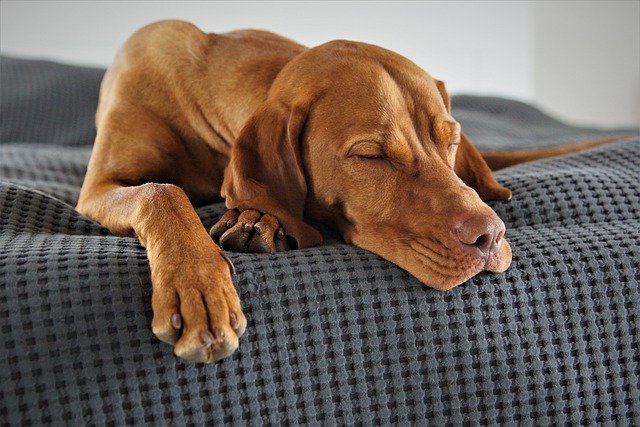 How can I tell if my dog is having a seizure while sleeping or just dreaming?

Dogs often make quite dramatic movements when they are asleep. They might be having a dream or they could be suffering a seizure.

How can you tell which?

If your dog is just dreaming it will:

If your dog is having a seizure, you will need to look out for these signs:

Causes of seizures in dogs

Seizures – also called fits – are the result of a neurological condition. This disorder is linked to the animal’s nervous system.

It has been established that seizures are most likely to happen when there is a change in the activity in the brain.

Falling asleep, waking up, and being frightened or excited are prime times for seizures to happen.

The most frequent reason for seizures in dogs is a condition called idiopathic epilepsy.

Idiopathic epilepsy is an inherited complaint but no one knows what causes it.

There are a number of other causes of seizures in dogs while they are sleeping.

Types of seizures suffered by dogs

Basically, there are two main types of seizure that occur in dogs:

Grand mal seizures. These are the most frequently reported.

Your dog will suffer convulsions that affect his whole body and they will probably lose consciousness.

If they are already asleep, they will become unresponsive.

The seizure will only affect part of their body.

The stages of a seizure in dogs

The pre-ictal phase. This is the phase before the actual seizure.

Your dog will seem to be restless, unusually alert, or unusually frightened.

If you see your dog showing these traits, and this is not normal behaviour, then it is possible that a seizure will follow.

The ictal phase. Sometimes the seizure takes the form of shaking rather than full convulsions.

A full seizure will feature much more violent shaking and a loss of consciousness.

If your dog is asleep, then beware that it will not respond to you or any other outside stimulus.

The post-ictal phase. Once the convulsions stop, your dog will probably wake up.

It is likely that they will be restless but also confused and unsteady on their feet.

They will also pant a lot and drool. It will take time for them to regain full control of their body.

What action to take when your dog has a seizure while sleeping?

If your dog suffers a seizure when sleeping, then the action you take will be vital to establishing the cause of the seizure.

Firstly, keep calm. If you panic, then you will likely forget to do something important.

Secondly, make a video of the seizure if that is possible. Use your phone or camera depending on which is the most convenient.

Thirdly, make a note of how long the seizure lasts. This will help your vet decide on cause and treatment.

When your dog wakes up, be ready to comfort them. They are likely to be confused and you can help them best by just being with them.

Talk gently and maintain physical contact. This will reassure your dog that all is well.

Also, keep them cool. A damp towel will do the trick.

Contact your vet immediately. If the attack was short – less than 4 minutes, then your vet will examine them and check their general health.

For a longer attack then your vet will want to see your dog immediately.

What you should NOT do

Firstly, do not panic. As we said above, if you forget something important, then future treatment may be affected.

Do not try to stop your dog swallowing its tongue. You may get bitten and the dog is unlikely to swallow its tongue anyway.

Do not try to wake your dog up. Wait for the seizure to take its course. Then comfort your dog and wait for them to come back to normal.

What does a dog seizure look like while sleeping?

During a sleep seizure limbs would be stiff and rigid, with movements that are more aggressive and last for more than a few minutes; if they are simply dreaming, you’ll find they are kicking their legs out, paddling or twitching instead, usually only for thirty seconds or less.

Other signs of seizures in dogs include:

Do bear in mind that whilst a sleeping dog is easily woken, you should avoid doing so if possible as they may be startled and lash out at you unintentionally. They don’t say “let sleeping dogs lie” for nothing after all!

What causes a dog to have a seizure while sleeping?

Typically, a dog will have a seizure because of an underlying condition, like idiopathic epilepsy; unfortunately, the term “idiopathic” means that veterinarians and canine experts remain unsure as to why these seizures occur.

Sometimes it is a hereditary condition inherited from their parents, but otherwise, there’s not that much information out there.

Epilepsy is a chronic condition, so the seizures caused by this condition tend to be recurring but sporadic, often happening outside of a particular pattern and at random, making it difficult for owners to work out when to expect them or not.

Canine epilepsy impacts around 0.5-7% of the dog population, which equates to approximately every one in twenty dogs experiencing seizures during their lifetime.

There are a few other causes of seizing in sleeping dogs, for instance:

There are three ways of categorizing seizures in dogs, too:

Reactive seizures are a result of metabolic diseases or exposure to toxins that impair an otherwise healthy brain – these are diagnosed by history information, bloodwork and other tests.

Symptomatic seizures stem from a structural brain disease, such as infections or inflammation of the brain, strokes, tumors, malformations and other root causes – you would diagnose this with an MRI or other brain imaging examination, occasionally with some analysis of spinal fluid

Idiopathic/unknown seizures: as explained above, these cannot be given an identifiable cause, and usually refer to epilpetic seizure – the only way to diagnose this is to rule out the above two kinds of seizures first, with a full set of clear diagnostic test results.

How can I tell if my dog just had a seizure?

There are three stages to a seizure: pre-ictal, ictal and post-ictal. It is important to know the signs of each period as this will help you to confirm whether or not your dog is seizing.

Pre-ictal dogs tend to appear restless or otherwise alert and stressed for seemingly no reason, due to a sudden change in activity. The ictal phase is the seizure itself, and as outlined above, this is usually defined with light to violent shaking, repetitive movements or even a loss of consciousness.

Post-ictal dogs who have just had a seizure will usually be very dazed and confused, appearing distressed or overly tired, and they may be drooling or salivating more than usual also.

What dogs are prone to seizures?

According to the American Kennel Club, there are several different breeds who are prone to idiopathic epilepsy, including:

However, it is important to note that any dog can have a seizure, whether they’re a pure or mixed breed, so be aware of the signs regardless of which breed belongs to your family.

Should I take my dog to the vet if they have a seizure?

Your primary concern during your dog’s seizure is to ensure they do not hurt themselves during convulsions. If you can, keep them away from stairs or any hazards, and always avoid putting your hands/fingers near your dog’s mouth as they might accidentally bite you.

Stay calm and focused: note how long the seizure is lasting and the side effects – taking a video can also be helpful as this can be shown to the veterinarian and makes diagnosis a little easier.

If your dog has had multiple seizures in a row, or has been seizing for longer than five minutes, then you should go to the vet immediately. Otherwise, you need to call your vet for advice regardless, even if they seem perfectly fine after the seizure has passed.

It’s possible your vet will want you to bring your pooch in for them to give a check over, or maybe note down on their record that the seizure happened and then ask you to come in should they seize again. It is advised you keep a “diary” of the seizures, noting down when it happened, how long for and what symptoms they experienced during.

Remember: you are the person who knows your dog best, and if you are worried about them, you should get in touch with the vet. For your beloved furry family members, it is always better to be safe than sorry.

How long does it take for a dog to recover from a seizure?

It depends on several factors: the breed of dog, their age, the severity of the seizure, why it happened in the first place… it’s difficult to offer an exact estimate for a recovery period, though most pups tend to have a prolonged time of around 24 hours or so where they are in the post-ictal phase.

At this time, you’ll find them generally confused, unaware of their surroundings and appearing to pace back and forth with no real purpose, wandering aimlessly about the house or outside. It’s possible that with more severe seizures, your dog may also show increased urination, increased thirst or temporary blindness during this time.

Hopefully, in a day’s time, your beloved furry friend will be back to their normal, waggy-tailed selves. Some pooches only take a few hours to recover, whereas others need the entire 24 hours – it depends on the individual and the other factors mentioned above.

Can certain foods cause seizures in dogs?

Yes, they can. One example would be foods too high in sodium, as these can eventually cause salt toxicity, one of the primary symptoms of this being seizures and pancreatitis. Dairy products featuring casein, a protein found in cow’s milk, are also likely to increase the possibility of seizing, and should be avoided.

Other research suggests that bulky, carbohydrate rich meals or a primarily rice based diet (even more so when the food constitutes both categories) dogs are more prone to seize afterwards.

It’s also possible that the act of eating itself, rather than the food that the dog is eating, could be causing their seizures. Again, it really just depends on the pooch in question, so it’s difficult to give a list of potential triggers beyond the above.

Can dehydration cause seizures in dogs?

Although there has been no research conducted into whether seizures in canines are linked to dehydration specifically, because extreme dehydration in humans can result in seizures, it’s very possible the same can be said for our furry counterparts.

Regardless, dehydration is incredibly dangerous for your pooch regardless of the symptoms it evokes, so it should be avoided at all costs – always make sure you have a bottle of water with you. If you’re thirsty, your dog probably is too!

Back to Top
Close
467 shares
We use cookies to ensure that we give you the best experience on our website. If you continue to use this site we will assume that you are happy with it.Ok